Debris from cockroaches and dust mites, fungus spores, pet dander, noxious chemicals. . . . These are a few of the things that can make the typical home a dangerous place for people with asthma. Molecules from these agents can trigger unnecessary immune responses in a susceptible person, producing breathlessness, wheezing, and coughing. Some people outgrow asthma after childhood, some first develop it in adulthood, and others must cope with it all their lives. Over time, inflammation can reshape a person’s airways and leave the lungs permanently impaired. 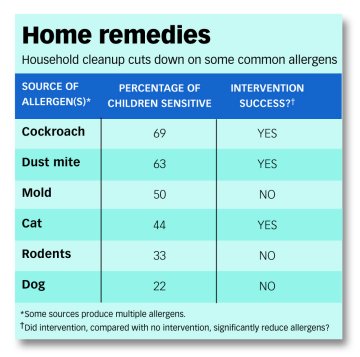 The world is in the clutches of a poorly understood epidemic. Globally, rates of asthma have been rising for years. In the United States, the condition’s prevalence has more than doubled since 1980, and asthma now affects up to 15 million people, including 6 million children.

The annual number of deaths from complications of asthma, which had been in decline through most of the 1960s and 1970s, climbed back up though the 1980s and reached a new high in the mid-1990s. Since then, the death toll has continued to rise, despite medical advances.

Scientists don’t know why asthma’s prevalence is increasing, although some evidence suggests that the condition is associated with exposure early in life to certain synthetic chemicals that have become widespread in recent decades (SN: 7/24/04, p. 52: Available to subscribers at Dangerous Dust? Chemicals in plastics are tied to allergies). Rather than directly triggering inflammation, these chemicals may predispose a person’s immune system to overreact to other commonly inhaled particles.

Researchers have devised therapies to suppress airway inflammation. The ubiquitous steroid-dispensing inhaler “has been a fantastic boost in the treatment of asthma,” says clinical allergist and asthma specialist Albert Sheffer of Harvard Medical School in Boston. Other medications can open airways during severe attacks.

However, even with medication, asthma disrupts daily activities and may require emergency medical and hospitalizations.

People with asthma are generally advised not only to use medical tools but also to avoid environmental triggers—which vary from person to person—to reduce the number of attacks.

Until recently, studies of such environmental measures had shown little effectiveness. Now, a team of scientists reports a study indicating that cleansing the home of the substances that trigger asthma can reduce the number of attacks experienced by susceptible people. In this study, families received intensive, tailored support for reducing exposure to those substances by children with asthma.

The experimental intervention was expensive, so it remains uncertain how those findings might produce large-scale benefits. Nevertheless, many asthma specialists are pleased to see evidence that the interventions can have a clear effect.

“There’s not a single cause of asthma,” says epidemiologist Herman Mitchell of Rho, a Chapel Hill, N.C.–based research firm that conducts clinical trials of new therapies. “For some children, it’s cockroaches; for some, it’s dust mites.” Other common household sources of trigger substances, known as allergens, are cats, dogs, rodents, and mold. All these allergens can be found in dust that accumulates on bedding, rugs, and other such surfaces.

Most asthmatics are sensitive to multiple allergens, Mitchell notes. Environmental interventions for asthma should be as varied as the condition’s causes, he argues. Physicians must test each patient to determine which allergens his or her body reacts to. Such testing has been common for decades, but doctors’ recommendations about steps that patients can take haven’t necessarily been tailored to test results. For years, Mitchell says, “asthma interventions were canned.” Oftentimes, they consisted of little more than instructing parents to get rid of pets and household-dust magnets, such as shag carpeting, and to keep their kids away from cigarette smoke.

Mitchell and his medical colleagues at Rho and at collaborating research institutions decided to get more specific. The study enrolled 937 children aged 5 to 11 years, with moderate-to-severe asthma. The children lived in poor neighborhoods of seven U.S. cities and most were black or Hispanic.

The investigators used skin-prick tests to establish which of 11 likely substances caused allergic reactions in each child. In this common test, a doctor, nurse, or technician applies various allergens to tiny scratches on a person’s skin. An inflamed wheal at any site indicates sensitivity. The researchers also analyzed dust from each child’s home to see which allergens could be detected.

Half the families participating in the study didn’t receive a tailored program of interventions. For the other half, the team introduced up to six specific interventions to address particle types found to be both problematic and present in their homes.

Interventions included hiring a pest-control service for families with children sensitive to and exposed to cockroach allergens, providing air purifiers fitted with high-efficiency particulate air (HEPA) filters to homes where mold, cat or dog allergens, or cigarette use created problems, and supplying vacuum cleaners with HEPA filters to combat dust.

The researchers distributed tightly woven coverings that prevent dust mite allergens from escaping a pillow, mattress, or box spring. They also instructed families to use mild bleach to eliminate mold and to remove a dog or cat that caused an allergic reaction in the child. On average, the team applied four measures per family in this group. “It’s a focused, tailored, personalized intervention,” says Mitchell.

To track asthma symptoms in both groups, researchers interviewed each child’s parents by phone every 2 months. Every 6 months or so, a different team of scientists visited each home to check for the presence of allergens and, in the intervention group, to discuss the changes that families had made.

During the first year of the study, children whose families had received the tailored environmental counseling had asthma symptoms on an average of 6.8 days per month, while children without the benefit of a tailored approach had 8.4 days of symptoms.

During a second year of follow-up, the intervention and non-intervention groups experienced symptoms on 2.6 and 3.2 days per 2-week period, respectively. Mitchell attributes both groups’ second-year improvement to the greater attention that families paid—after months of being contacted every 2 weeks by researchers—to helping children avoid allergens.

“This is the first time we have evidence [that] documents the validity of environmental control,” says Harvard’s Sheffer. He headed the National Asthma Education and Prevention Program in the early 1990s, when it began advocating tailored environmental measures for managing asthma. Until now, says Sheffer, such recommendations relied more on logic than on data.

“We had been promoting environmental control because it seemed obvious that reducing exposure to allergens should reduce symptoms,” he says.

Despite the logic of environmental control, reports last year by two research groups cast doubt on the approach. Those studies both appeared in the July 17, 2003 New England Journal of Medicine.

“Both groups are well-established [teams of] excellent investigators, so those negative results were very disappointing,” says Sheffer.

In one of the studies, Ashley Woodcock of Wythenshawe Hospital in Manchester, England, and his colleagues gave new covers for mattresses, pillows, and quilts to 1,122 adults with asthma. Half the volunteers received covers designed to create a barrier to dust mite allergens, and half got standard covers of more-permeable polyester and cotton.

During the subsequent year, the two volunteer groups showed no difference in the severity of their symptoms, their use of asthma medications, or their breathing, as measured by a device temporarily fitted over the mouth. The same was true when the researchers analyzed data only from the members of the two groups with known sensitivity to a dust mite allergen.

Allergist Roy Gerth van Wijk of the Erasmus Medical Center in Rotterdam, the Netherlands, and his colleagues attempted a similar intervention for allergen-associated inflammation inside the nose. That condition, called allergic rhinitis, often appears with asthma and is considered by some researchers to be part of the same syndrome.

The researchers distributed covers for mattress, pillows, and blankets—half of which were designed to be allergen impermeable—to 279 people with allergic rhinitis. The researchers found that the special bedding covers reduced the abundance of dust mite allergens but observed no noticeable symptom relief among the volunteers using them, compared with the experience of volunteers using standard bedding.

Accounting for the different results from Mitchell’s and his own group’s interventions, Gerth van Wijk suggests that the effect of environmental control may be noticeable only in children or that the combination of measures employed in the more recent study may be superior to the single method used in his own study.

Woodcock is skeptical that an approach with as many components as the Mitchell study had can prove practical on a broad scale. Because many of the homes in the study received multiple interventions, there aren’t enough data to determine the individual effect of each measure, Mitchell says.

“These are expensive interventions,” Woodcock says. “You wouldn’t give [a patient] four drugs and say, ‘I’m not sure which one works, but take all four.'”

One major expense is in sending a health care provider to collect the dust that’s needed to determine which allergens are present in a home. So, Mitchell and his colleagues at the National Institute of Environmental Health Sciences in Research Triangle Park, N.C., have recently developed a dust-collection kit that a family could mail to a laboratory, which would report its results to the child’s doctor.

Mitchell and other researchers recognize the challenge of bringing research findings to bear on asthma interventions in millions of homes. Allergists say that many families won’t get rid of a pet that’s contributing to a child’s asthma. And adults told to quit smoking are notorious backsliders.

Anticipating such hurdles, Mitchell and his colleagues cautioned adults in their study to keep pets out of the bedrooms of children with asthma and not to smoke around these kids. That may partially explain the reductions the researchers witnessed in symptoms, even though most families didn’t get rid of their pets or prohibit smoking in the home, Mitchell says.

In a recent survey of parents who were aware of at least one household trigger for their child’s asthma, for example, only 35 purchased a new vacuum cleaner, while 70 percent bought the recommended air filter. But of 112 families in which a parent’s cigarette use appeared to be a factor in a child’s asthma, only 7 took any action to reduce the child’s exposure to smoke, Michael Cabana and his colleagues at the University of Michigan in Ann Arbor reported in the August Journal of Allergy and Clinical Immunology.

To increase the probability that families will take steps against asthma, doctors need to determine the most critical measures and focus on promoting only those, says Woodcock.

Gerth van Wijk agrees that narrowing the recommended measures to a critical few could help people carry out doctors’ instructions. Mitchell and his colleagues probably overcame that hurdle, he says, because they had an extraordinary amount of contact with the families in their study.

“Education is one of the cornerstones of their intervention,” Gerth van Wijk says. But most doctors aren’t paid for taking extra time during office visits to fully explain the importance of reducing exposure to allergens and the methods of doing so.

The odds of a significant payoff may be best when pediatricians provide patient education, says Woodcock, because steps taken early in life to reduce allergen exposure might prevent the lasting lung damage that accumulates in chronic asthma.