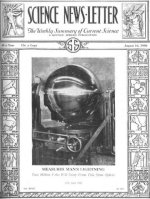 The shiny metal globe which the front cover pictures was spun on a lathe from two flat sheets of copper one-eighth inch thick. It will be used with another by the Westinghouse Electric and Manufacturing Company to measure man-made lighting of 2,000,000 volts and greater.

When high potentials are measured by sphere spark gaps, the distance between the spheres must not be greater than their diameters if the measurements are to be accurate, it has been found. One hundred centimeter, 39.3-inch diameter, spheres had been made to measure one million volts. This one is 150 centimeters, 59.16 inches, in diameter.

The old spheres were turned from cast brass and were heavy and expensive. The new one is simply made and weighs little more than 400 pounds. The flat metal was spun against a huge hemispherical wooden form. Two hemispheres of copper were made and soldered together. So accurate are they that their diameters differ by less than one-tenth inch.

Are heredity experts justified in assuming the role of Solomon in a dispute between parents over the identity of their offspring?

“Sometimes, only,” is the answer indicated by the mass of data accumulated by science to date on this question, which has awakened such controversy in the Watkins-Bamberger suit concerning the alleged interchange of babies at the Englewood Hospital in Chicago. In many instances, the experts would be forced to shrug their shoulders without essaying a definite “Yes,” or “No,” to the pleas of distraught parents.

While complete reports of the findings have not been made in public, newspaper accounts seem to indicate that this is a case where the blood group tests to establish parentage could apply. For the parents in question are said to belong to different blood groups and the children, according to the laws of heredity, would be distinguishable by a corresponding difference in type.

Because a spinning star is both moving toward you and away from you at the same time, astronomers can now measure their speed of rotation, and have found many that turn at 40 miles a second, 150 times the speed of the Earth at the equator.

This seemingly paradoxical effect occurs merely because one side of a turning sphere approaches while the opposite side recedes. Stand in front of a phonograph and watch the turntable as it revolves. If you drop a bit of paper or some small object on the right side, it will be carried towards you, but if you drop something else on the left side, it will be carried away from you at the same time.

Then, of course, the first thing will go from you and the second towards you. Only if you were directly above the turntable, or if the phonograph were tilted so that you were in line with the axis of rotation, would all parts of the table remain constantly at the same distance.

This is an example of the principle used by C.T. Elvey, astronomer at the Yerkes Observatory of the University of Chicago, to measure how fast a number of stars are turning.