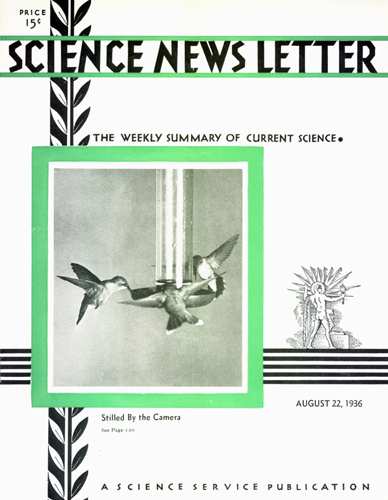 CAMERA STOPS THE WINGS OF HUMMINGBIRD IN FLIGHT

A remarkable stop-motion photograph of three female ruby-throated hummingbirds hovering about a vial of sweetened liquid is shown on the cover of this week’s Science News Letter.

Prof. Harold E. Edgerton, Kenneth J. Germeshausen, and Herbert E. Grier of the Massachusetts Institute of Technology, where this ultrahigh-speed method of photography was developed, found that in hovering the wings move at the amazing speed of nearly 60 beats a second.

The photograph, taken at an exposure of one one–hundred–thousandth (1/100,000) of a second, is believed to be the first of its kind showing the wing action of a hummingbird. It was made at the home of Mrs. Laurence J. Webster at Holderness, N.H., where Mrs. Webster, founder of the New Hampshire Nature Camp, has devoted many years to the study of wild bird life. The birds are so tame they take food from her lips, perching on her head and shoulder while awaiting their turn to feed.

NEW COSMIC-RAY DEVICE NEARS COMPLETION AT U. OF CHICAGO

More powerful than any other similar apparatus in the world is the new cosmic-ray equipment now nearing completion in the laboratory of Prof. Arthur H. Compton, Nobel Prize scientist of the University of Chicago.

Heart of the device—a Wilson cloud chamber—is a giant, 12-ton magnet whose strong field will bend cosmic rays and the atomic-electrified debris so that their energies can be calculated. The magnetic field generated by the new Chicago magnet will be 40,000 times as powerful as that of the Earth. The magnet was designed by Prof. Compton and his research associate, Haydn Jones.

The equipment will be used, states Prof. Compton, in a new series of experiments by which it is hoped further data can be obtained on high-energy particles to see if the known laws of electricity apply to them.

As cosmic rays pass through the moist gas of the Wilson cloud chamber in the field of the magnet, they will leave a fog trail that is automatically photographed. Prof. Compton estimates that there should be one cosmic ray entering each second and about one out of fifteen will be moving in the proper direction for photographing.

The magnetic field will bend the paths of the cosmic rays. Very high-energy particles are less susceptible to deflection than are those of lesser energy, in somewhat the way that a baseball is harder to curve than is a ping pong ball. Because the magnetic field will curve the tracks of the paths of particles of high energy to a lesser extent than it will those of low energy, Professor Compton will be able to judge the energy, and determine if the particles are positively or negatively charged.

Previous experiments have measured energies up to 20 billion volts, but Professor Compton hopes to extend the measurement with his magnet to energies of 40 billion volts.

Discovery of notable amounts of the rare metals, gallium and germanium, in the Earth’s only imports from outer space, the meteorites that fall from the sky, was announced by Dr. Arthur S. King of the Carnegie Institution’s Mt. Wilson Observatory in a paper presented to the Society for Research on Meteorites.

Emphasizing the usefulness of spectroscopic analysis instead of the regular chemical and mineralogical methods for determining the elements present, Dr. King found that iron meteorites have some 19 elements within them, including in largest quantities iron, nickel, cobalt, and copper.

In spectroscopic analysis, the different kinds, colors, wavelengths, or spectral lines of light are viewed or photographed and studied. Each element when heated intensely flies its own kind of light “flag.” The larger the amount of the element present, the more intense is the brightness of the spectral line.

Unlike irons of the Earth, iron meteorites are almost free from chromium and manganese. Another interesting fact is that traces of silver are present and those from Meteor Crater in Arizona give the silver spectrum in considerable strength.

Stony meteorites are quite different in composition from the iron ones, although they contain a large percentage of iron. Dr. King suggests that their iron explains why the stony ones are not entirely consumed by heat when they smash into the Earth’s atmosphere.

A large amount of sodium is a striking feature of stony meteorites as analyzed by the spectroscope. There is nearly as much magnesium in them, and Dr. King suggests that their high content of this metal, which burns with a bright flame, accounts in large measure for the spectacular features of meteoric falls that are seen over large areas.