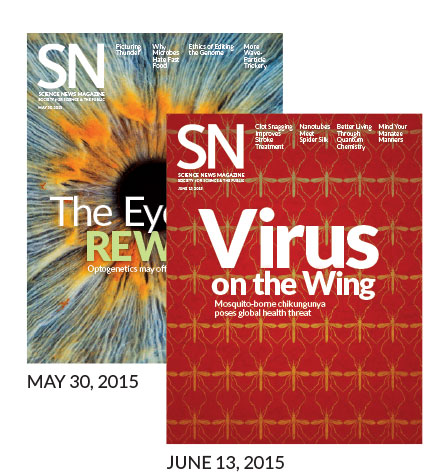 A new technology called optogenetics may help restore sight for some blind people. In “Seeing the light” (SN: 5/30/15, p. 22), Tina Hesman Saey explained how scientists are recruiting nerve cells in the eye to act as light detectors.

Reader Steve Schlosser thought the light-processing machinery of the eye’s retina sounded just a bit backwards. “It would seem that the ganglion cells — which ‘have long tails that bundle together to become the optic nerve and send messages to the brain’ — would be the final section of the eye, not the first one that intercepts light. But the commentary and the diagrams all show the ganglions first, the bipolar cells second and the rod and cone cells as last.”

Nathan Seppa’s “Chikungunya is on the move” (SN: 6/13/15, p. 16) explained how the tropical virus is creeping into cooler climates, carried by mosquitoes. Readers on Facebook shared their own encounters with chikungunya.
“I got this late last year. There was no treatment at the time, and I am still feeling it from time to time. Your joints feel like they are broken, literally.”
— Benedict Beharry
“It was starting to hit St. Thomas really hard right before I moved off the island (August 2014). So many people I know became crippled with illness. Some of them still have joint pain.”
— Laura Dennen
“My sister is just recovering from this and says it was much worse than dengue.”
— Rebecca Weissinger

It seems intuitive that light should encounter the ganglion cells last, says Saey. But the retina in mammals is set up so that light encounters the ganglion cells first and the light-detecting rods and cones last. Humans, other primates and some other animals work around the setup with the help of a structure called the fovea, in which the bipolar and ganglion cells have been moved out of the way so that the rods and cones are first in line to receive light. Humans take advantage of this by cramming the fovea with cones, which give sharp day vision. Rods, which allow night vision, ring the periphery. People constantly move their eyes so that the fovea scans the visual field, taking split-second snapshots that the brain stitches together into streaming video.

Billions of years ago, Earth’s oceans endured blistering temperatures thanks to incoming asteroids. The aftermath of these collisions may have shaped the evolution of the planet’s first organisms, Thomas Sumner reported in “Impacts may have boiled early seas” (SN: 6/13/15, p. 12).

“So, archaea dwelling near super-heated volcanic vents would definitely have a selective advantage for surviving a catastrophe like this,” wrote commenter bruzote. “Heck, would they even notice?”

Organisms that thrive in hot environments, known as thermophiles, would have fared better than anything that needed lower temperatures, says Sumner. “Also, anything that lived deep in the oceans or underground probably wouldn’t have noticed anything change at all. The scorching temperatures were confined mostly to the atmosphere and surface.”

The mammoth in the room

In “How scientists will (or won’t) bring back extinct species” (SN: 6/13/15, p. 27), Allison Bohac reviewed How to Clone a Mammoth, a book that explores the process of reviving long-gone animals with genetic engineering.

Some readers couldn’t wait to welcome mammoths back into the world. “This would be awesome!” exclaimed Rosie Trujillo Miller on Facebook. But not everyone was excited. “I do not think that just because we may have the capability to create certain species that it is a good idea. No one, honestly, has any idea what the consequences of that might really be, no matter how much research has been done,” wrote Rebecca T. Reader Anna Grig asked, “What would be a reason, apart from scientific curiosity, to clone just one piece of an environment that we know so little about?”

Despite concerns, some readers saw a lot of potential in the research. Working to bring back extinct species might provide useful information about genetics and gene manipulation, wrote commenter Nas. “All in all, it could lead to a huge step forward in science, specifically medical sciences.” Reader Tim Cliffe agreed, adding: “The article points out something that many people don’t know: Mammoths and the other Ice Age megafauna helped to create the ecologies in which they lived, and they could conceivably do so again. I feel that there is an additional reason — in all probability, we are responsible for having exterminated these creatures, and we ought to try and correct that mistake.”