Mix one part enthusiasm, two parts engineering and three parts biology — and you’ve got a recipe for do-it-yourself genetic engineering.

Every November, college kids from Michigan to Munich descend on MIT, eager to show off their biohacking skills. In the International Genetically Engineered Machine (iGEM) competition, teams battle one another to build the coolest synthetically altered organisms. If you want to create a microbe that will sniff out and destroy contaminants in mining waste ponds, or a cell that will produce drugs right in your body, iGEM is for you.

Pioneers of synthetic biology founded iGEM in 2003 to get young scientists thinking about the field’s possibilities. What began as a small winter project at MIT has expanded to 191 collegiate teams, plus divisions for high schoolers and entrepreneurs. “The thing the world needs is more excited engineers,” says Randy Rettberg, an iGEM founder and its current director.

Each spring, organizers at iGEM’s Cambridge, Mass., headquarters FedEx out kits containing about 1,500 biological “parts.” Most of those parts are engineered fragments of genetic material that can be put into bacteria to make them do a particular task — make more of a specific protein, say, or turn off gene activity. Students can use the provided parts or build their own. “We say iGEM isn’t easy, but iGEM is worth it,” Rettberg says.

At many universities, iGEM teams have achieved a sort of rock-star legacy, with the same students signing up year after year. Others have to start from scratch. In 2012, for instance, the University of Colorado Boulder fielded its first iGEM team.

Boulder team leader Joe Rokicki and his crew read paper after paper, brainstormed possible projects and settled on a bacterial night-light. They managed to clone six genes involved in light production in the bacterium Aliivibrio fischeri — but ran out of time to make those genes do anything significant.

“We’ve been so invested in this every day,” says team member Max Jacobs. “But,” adds Simon Greenberg, a bit wistfully, “we’re at the whim of the cells.” The Colorado team didn’t advance past regional semifinals.

This year’s overall iGEM champion: the University of Groningen from the Netherlands. Its Food Warden sticker uses engineered Bacillus subtilis to sense rotten meat and turn yellow or purple as an alarm.

Students from the University of Groningen triumphed in the 2012 iGEM competition by creating a prototype sticker (below) to signal food spoilage. The Food Warden sticker uses bacteria engineered to activate a pigment-producing gene when substances made by rotting meat are present. The sensor might help reduce food waste by determining when meat is actually starting to go bad instead of relying on an arbitrary “use by” date. Of 338 people surveyed by the research team, two-thirds said that they would pay a few cents extra for such a product in their food packaging, even though it contains genetically modified organisms. 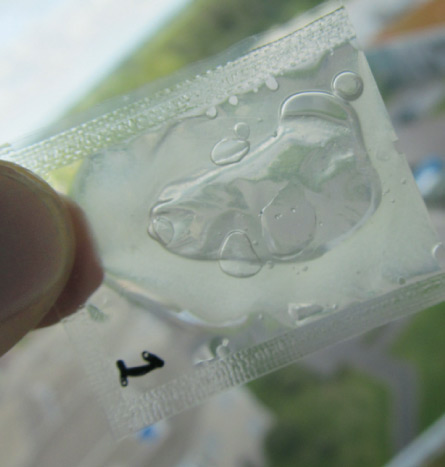