When the Three Gorges Dam begins to impound the waters of the Yangtze River in south central China later this year, dozens of the mountains and other elevated areas upstream will become islands. If the ecological results of similar projects around the world are a guide, the outcome will devastate the rich diversity of species now living along the river, according to a team of scientists. 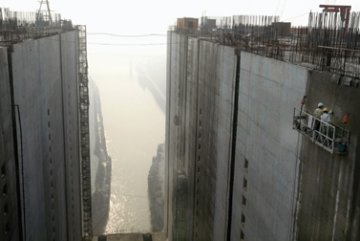 The Three Gorges Dam, the world’s largest, will stand 185 meters tall and stretch more than 2.3 kilometers across the river. Although the dam’s reservoir will eventually cover only 1,080 square kilometers, the ecological effects might be felt across a region of about 58,000 km2, estimate Jianguo Wu, an ecologist at Arizona State University in Tempe, and his colleagues in the May 23 Science. A bit larger than West Virginia, that swath of China is home to more than 6,300 species of plants–57 of which are endangered–and many rare animals such as the Chinese river dolphin, which is unique to the Yangtze.

Species on as many as 100 new islands that the dam’s reservoir could create will have to adjust to sudden losses and fragmentation of habitat and a more humid microclimate, says Wu. Terrestrial animals fleeing the rising waters will become concentrated on the remaining dry land, increasing competition among species and possibly reorganizing the local food chains.

On island ecosystems created by other hydrological projects, those sorts of pressures have wreaked both immediate and long-term devastation. Wu’s group cites, for example, Panama’s Barro Colorado Island. That 15-km2 isle formed when the Chagres River was dammed in 1913 to provide waters for the Panama Canal. Within 50 years, the island lost almost half of the bird species that had bred at the site before the dam was constructed. Also, small islands in Lake Guri, which formed when Venezuela’s Caroní River was dammed in 1986, lost their top predators in less than 4 years, and more than 75 percent of their vertebrate species disappeared within 15 years.

Losses in both regions may actually have been higher because detailed biological surveys weren’t performed until several years after the islands formed, says Wu. Scientists are already studying the Three Gorges region to compile an accurate ecological baseline for future studies, he notes.

The environmental impact of the Three Gorges Dam will be tremendous, says Fangliang He, an ecologist with the Canadian Forest Service in Victoria, British Columbia. With the shrinkage of habitats, there may be a population crash among animals, and some plant species may lose the animal partners that typically pollinate them or disperse their seeds, he notes. On the other hand, scientists concede, the natural experiment will be a great opportunity to study the effects of habitat fragmentation.

If you have a comment on this article that you would like considered for publication in Science News, send it to editors@sciencenews.org. Please include your name and location.