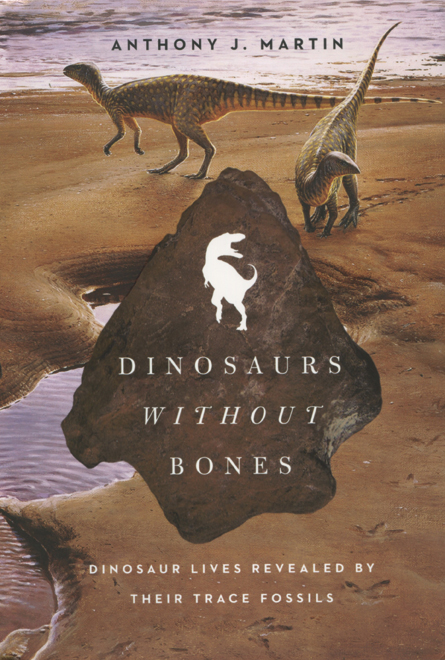 When people walk into a museum’s dinosaur hall, what makes them gasp in awe are the incredibly huge bones. An adult T. rex, which could be up to 12 meters long, had teeth the size of bananas. A humerus, or upper arm bone, of the largest (thankfully vegetarian) long-necked sauropods is by itself bigger than the average adult human.

Though paleontologists have learned extraordinary things about dinosaurs and their evolution from bones, there’s a lot that skeletons and skulls can’t divulge. More revealing, and in many places more common, than bones are trace fossils that don’t contain any remnants of body parts. Detailed study of these indirect fossils, called ichnology (think CSI meets Jurassic Park), provides a wealth of information about how dinosaurs may have behaved.

Author and ichnologist Martin takes readers on a spellbinding tour of the myriad types of trace fossils that dinosaurs left behind during their 165-million-year reign. The most familiar, if not the most common, are footprints and trackways. While the size and shape of an individual footprint helps identify the type of creature that made it, analyses of a trackway (a series of impressions made at the same time) can tell researchers about the animal’s gait and walking speed — and even whether the track-maker was limping due to deformity or injury.

Similarly, tooth marks on bones provide clues about who was eating whom. If the wounds show signs of healing, the bite marks were obviously made by an unsuccessful predator, not a scavenger. Coprolites, or fossil dung, often include remains of a meal but may also contain burrows of insects and other small creatures — reminders that dinosaurs were members of thriving ecosystems, not merely loners romping across barren landscapes.

Trace fossils include the arcane as well — everything from resting traces (aka “butt prints”) and burrows to eggs and nests, which provide keen clues about dinosaur reproductive biology and whether or not parents provided care for their hatchlings.

Filled with wry humor and tales of Martin’s fieldwork, conducted across the globe, Dinosaurs Without Bones is a nuanced tutorial. He superbly and thoroughly explains how paleontologists-cum-forensic-scientists interpret the subtleties of traces locked within rocks for millions of years. These tales bring science, as well as creatures long dead, to vibrant life.