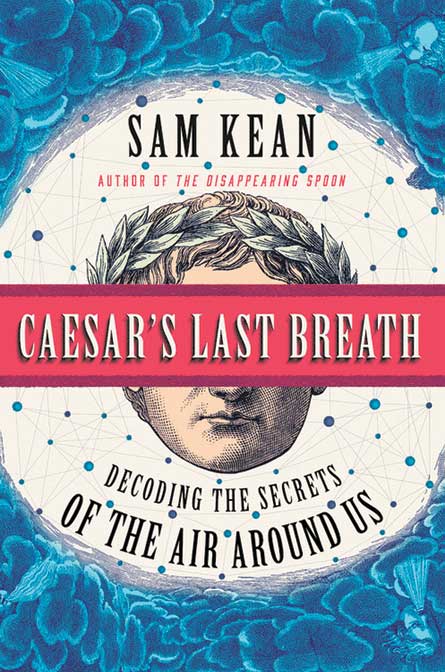 Julius Caesar could have stayed home on March 15, 44 B.C. But mocking the soothsayer who had predicted his death, the emperor rode in his litter to Rome’s Forum. There he met the iron daggers of 60 senators.

As he lay in a pool of blood, he may have gasped a final incrimination to his protégé Brutus: You too, my son? Or maybe not. But he certainly would have breathed a dying breath, a final exhalation of some 25 sextillion gas molecules. And it’s entirely possible that you just breathed in one of them.

In fact, calculating the probability of a particle of Caesar’s dying breath appearing in any given liter of air (the volume of a deep breath) has become a classic exercise for chemistry and physics students. If you make a few assumptions about the mixing of gases and the lifetimes of molecules in the atmosphere, it turns out that, on average, one molecule of “Caesar air” — or any other historic liter of air, for that matter — appears in each breath you take.

Author Sam Kean begins his book Caesar’s Last Breath with this exercise, noting that “we can’t escape the air of those around us.” It’s all recycled, and every day we breathe in a bit of our, and Earth’s, history. “The story of Earth,” he writes, “is the story of its gases.”

Kean, author of a best seller about the periodic table, The Disappearing Spoon, then tells that story. As he did in his fascinating portraits of the elements, Kean profiles individual gases such as nitrogen and oxygen primarily through the scientists and entrepreneurs who discovered or sought to harness them. These are quirky men (and they are mostly men) — every bit as obsessed, greedy and brilliant as one could hope for in a page-turner.

Along with lesser-known backstories of textbook heroes such as James Watt, Antoine-Laurent Lavoisier and Albert Einstein (who was surprisingly obsessed with building a better refrigerator), Kean clearly delights in weaving in the unexpected. In the discussion of helium, we learn about Joseph-Michel Montgolfier, the papermaker who was inspired to build the first hot-air balloon as he watched his wife’s pantaloons billowing suggestively above a fire. And in a chapter on the radioactive elements carried in nuclear fallout, there’s Pig 311, a sow that survived a nuclear test blast only to be used as propaganda for the weapons’ supposed safety.

Along the way, Kean threads in the history of Earth’s atmosphere in a surprisingly compelling narrative of geologic history. He steps aside from Lavoisier’s work on life-giving oxygen, for example, to describe the Great Oxygenation Event, which infused the atmosphere a couple billion years ago with a gas that, at the time, was toxic to most living things. The explanations of science here and throughout the book are written clearly and at a level that should be understandable with a high school education. And while they’re straightforward, the explanations have enough depth to be satisfying; by the end of the book, you realize you’ve learned quite a bit.

Even those who rarely read science will enjoy the drama — death, for instance, plays a big role in these stories. Over and over, we learn, men have taken gases’ powers too lightly, or wielded their own power too cruelly, and paid the price. Fritz Haber, for instance, could have died a hero for finding a way to make fertilizer from the nitrogen in air. Instead, he died broke and loathed for his World War I work on gas warfare.

Then there was Harry Truman — not that Truman, but the one who refused to leave his home when scientists warned of an impending volcanic eruption. Truman contended that officials were “lying like horses trot” right up until Mount St. Helens blew searing gases that erased him from the mountainside.

The links between these stories can seem at first as ephemeral as the gases, but together they tell the story of the birth of the atmosphere and humans’ history in it. In the end, like Caesar’s breath, it all comes full circle.

Buy Caesar’s Last Breath from Amazon.com. Sales generated through the links to Amazon.com contribute to Society for Science & the Public’s programs.