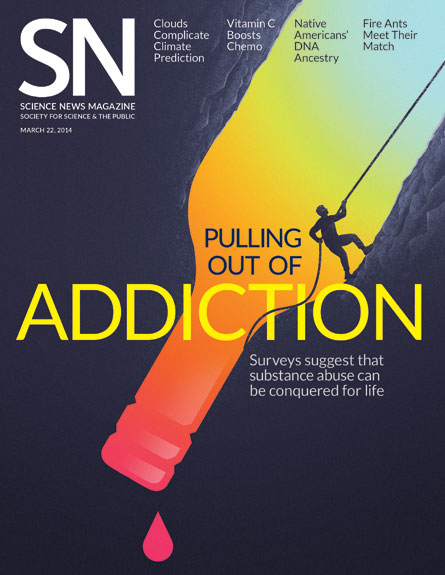 Addiction is often seen as a chronic disease, but some long-term studies suggest it can be viewed as a temporary coping problem instead. Bruce Bower presented this alternative view in “The addiction paradox” (SN: 3/22/14, p. 16).

“A nice job by Bruce Bower, as usual. I don’t think it helps when researchers dichotomize conditions as behavioral or biological. Heart disease and diabetes are biological conditions, but they can be ameliorated by behavioral changes involving diet and exercise,” noted William Check in an e-mail. “Life circumstances make a difference. It seems to me that a menu of treatment options — or nontreatment — makes the most sense.”

As many as 988 million birds die from slamming into windows each year in the United States, according to a new estimate reported by Susan Milius in “Windows are major bird killers” (SN: 3/22/14, p. 8).

Estimated annual bird deaths in the United States by cause

Science News reported on bird deaths from window collisions, prompting readers to ask which human-made hazard kills the most birds.

“So can they stop blaming windmill power generators [for killing birds]now?” asked online reader bobfairlane. “Not really, no,” replied reader RobertPPruitt. “The problem with windmills isn’t the total number of birds killed. It’s the number killed compared to the number of windmills. There just aren’t all that many windmills compared to windows. The biggest problem is the simple fact that windmills seem to work best in areas with a higher and more consistent wind speed. But those also happen to be the same areas that migratory birds prefer to use to travel long distances.”

The online title for the story, “Windows may kill up to 988 million birds a year in the United States,” prompted some readers to imagine a very different kind of threat. “I always thought that Windows was a big problem. OS X is much better,” joked Casey Burns. “Microsoft should be ashamed!”

Clouds pose a conundrum for atmospheric scientists, since they have the potential to either accelerate or dampen global warming. In “Cloudy forecast” (SN: 3/22/14, p. 22), Gabriel Popkin discussed some of the challenges facing researchers as they try to sort out clouds’ influence on climate.

“In Gabriel Popkin’s very interesting and educational article, cloud physicist Ulrike Lohmann is quoted as saying, ‘The amount of ice in the atmosphere seems to exceed the amount of liquid almost everywhere,’ ” George Sitts wrote in an e-mail. “Our planet is home to a great amount of liquid water, from the seas, lakes, underground aquifers and cloud droplets. It would be easy to infer from her statement that ice in the atmosphere exceeds almost all of our planet’s liquid water. That sounds incredible and unlikely.”

Popkin says that Lohmann was indeed referring to only the liquid in clouds. “The reader is correct that when taking into account all of Earth’s water, liquid is far more abundant than atmospheric ice.”

Douglas B. Quine notes that among the many factors affecting cloud cover that were discussed in the article, one was left out: time of day. “Clouds cool through reflection during the day, and they reflect a lot of energy back to Earth at night. The global balance between these two depends in part upon the time of day that clouds are present. Cloudy days and clear nights will enhance cooling, whereas clear days and cloudy nights will enhance heating. To the extent that cloud cover has circadian patterns, how much of a difference might these patterns make?”

Popkin says that while clouds do cool Earth during the day and warm it at night, whether shifts in clouds’ daily patterns will alter climate is unclear. NASA atmospheric scientist Anthony Del Genio adds, “so far I haven’t seen any evidence that shifts in the time of day when clouds occur are a big factor in the cloud feedback we predict, probably because the big cloud feedbacks are mostly over the ocean, where day-night differences are much smaller. But in principle, it could happen.”