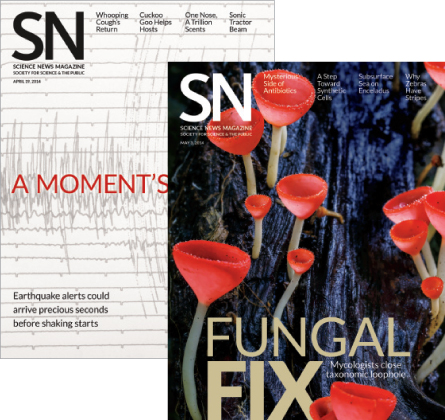 Astronomers spotted icy rings encircling the planetoid Chariklo, a 250-kilometer-wide hunk of ice and rock that orbits the sun between Saturn and Uranus. In “Icy rings found around tiny space rock” (SN: 5/3/14, p. 10), Christopher Crockett added that Chariklo may also have unseen orbiting moons keeping the rings in place.

These characteristics make Chariklo sound awfully planetlike, as some readers pointed out. “This ‘planetoid’ has its own orbit around the sun, so what criterion does it fail, preventing it from being called a ‘planet’?” asked online commenter Anthony Giarratano.

To be a planet 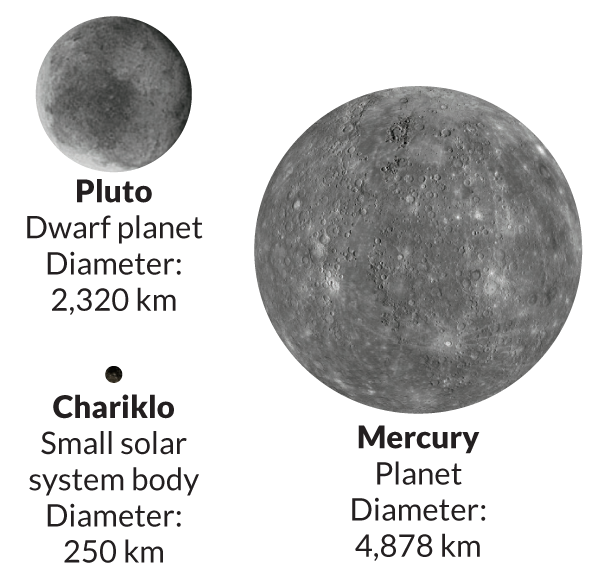 Size is a starting point for establishing planet­hood, but in 2006 the International Astronomical Union set additional criteria for planets in Earth’s solar system. Chariklo orbits the sun but doesn’t meet the other standards, while dwarf planet Pluto hasn’t cleared its orbit of space debris.

Current IAU definition of a planet (in our solar system):

Orbiting a sun is one characteristic of a planet, says Crockett, but astronomers look at other features, such as size and shape, when making the distinction (see sidebar). “There are many types and subtypes of little things out there, and some objects seem to straddle traditional boundaries. Chariklo is a centaur, a family of objects between Jupiter and Neptune that split their personalities between asteroids and comets. Historically the terms planetoid, minor planet and asteroid were interchangeable, but as astronomers learn more about the solar system, they’ve had to adapt their definitions (see also: Pluto). These days, they prefer the slightly unwieldy ‘small solar system bodies’ when referring to anything smaller than a dwarf planet.” And what counts as an exoplanet is even murkier.

Taking molecules for a spin

In “Fastest-spinning molecules” (SN: 5/3/14, p. 5), Andrew Grant reported that a powerful laser set some molecules of oxygen and nitrogen whirling, ramping up their speed to 600 trillion rotations per minute. Tires spinning at the same rate could carry a car to the nearest star in half an hour, he noted.

Some readers had trouble wrapping their minds around that analogy. If the molecules were traveling as fast as the hypothetical car’s tires, they would be violating an important tenet of physics. “It seems to me that the outer bits of the oxygen and nitrogen molecules would be moving faster than light. I must be missing something, since I haven’t heard anything about anyone having figured out how to exceed that particular speed limit,” wrote Bill Robertson in an e-mail. “What gives?”

The comparison isn’t perfect, admits Grant, because physics-wise, car tires don’t behave like individual molecules. “Obviously, nothing can travel faster than the speed of light. The point is that nothing we encounter in our everyday, macroscopic lives comes even close to spinning 10 trillion times a second. And since a molecule is far smaller than a car tire, its rotational velocity does not approach the speed of light.”

On a different wavelength

But visible light is just one type of light, as online commenter John Turner noted. “Is the transparency effect of the shrimp wavelength-dependent?” he asked. “Has anybody tried observing these shrimp with infrared film or an ultraviolet imager?”

Bagge, who chatted with readers about her work in the comment section of the story on the Science News website, responded: “These shrimp are transparent in the visible spectrum, but I do not know if anyone has yet measured the ultraviolet absorption of the tissues of these specific shrimp. Shallow waters do have a lot of UV radiation. It is thought that many transparent species are protected from radiation damage by having UV-protective pigments. Of course, if transparent shrimp absorb UV light as a means of protection, they could become visible to predators that have UV-sensitive vision.” She added, “We haven’t tried observing these shrimp with infrared film because no animals are known to detect those wavelengths.”