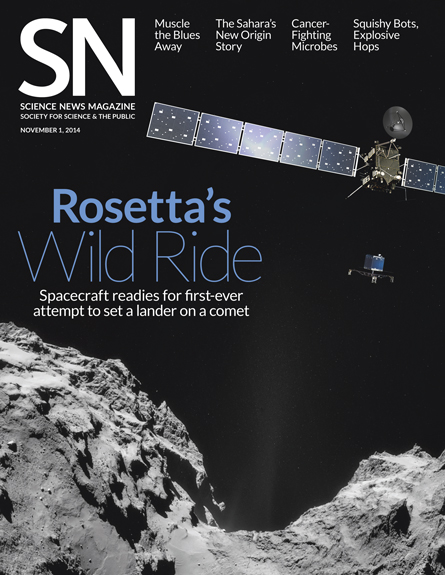 Dark side of the rainbow

Christopher Crockett’s “When a rainbow goes full circle” (SN: 11/1/14, p. 32) showcased a spectacular photo of a double rainbow snapped from a helicopter over Western Australia.

Sharp-eyed readers were quick to point out an interesting optical phenomenon in the image. “Not only does it show the full-circle double rainbow, the viewer can also discern that the outer bow has the spectrum colors reversed,” wrote Jean Parcher. “In most photos the second bow is too dim to see the reversal.”

Ray Rosich called attention to something else in the photo: “It seems to be very common for people to clearly observe the primary and the secondary rainbows but to not notice the dark band between them.” This relatively dim patch of sky, known as Alexander’s dark band, is created when water droplets between the colorful bows bend light away from the observer. He added that, so far, none of his family members share his enthusiasm for the physics behind the band. “Unfortunately, not being physicists, their eyes just glazed over during my explanatory monolog. I guess the beauty of physics only goes so far with nonphysicists!”

Searching for certain immune cells in the blood may help doctors predict how long a patient will spend recuperating from an operation, Nathan Seppa reported in “Test foretells surgery recovery time” (SN: 11/1/14, p. 16).

Anatomy of an illusion 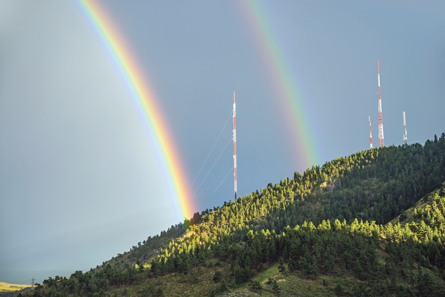 Sunlight bouncing around inside of raindrops produces both the bright primary bow of a double rainbow and the fainter, reversed secondary bow. Drops falling between the two bows can’t send light towards the viewer, creating a dim region called Alexander’s dark band.

The new test was able to sort out which patients were on the path to a good recovery only 40 to 60 percent of the time, which Linda Ferrazzara found perplexing. “Doesn’t that mean that it couldn’t predict good recoveries 40 to 60 percent of the time as well?” she wrote in an e-mail. “I’m not quite sure exactly what these tests were able to predict with enough of a chance of reasonable accuracy that it would be worth the time and effort (and expense) to even run them.”

The test was intended to be more explanatory than predictive, Seppa says. Not everyone heals from surgery at the same speed, and scientists are still trying to figure out why. The new test reveals a component of the biology that drives recovery. The researchers who did the study found variations in protein activity inside immune cells called monocytes that show up in the first day after surgery in patients who mend rapidly. Differences in these cell signatures explained up to 60 percent of the variation in recovery rates between patients, says study coauthor Martin Angst of Stanford Medical School. What accounts for the rest of the variation is still unclear.

While some bird populations in the United States and Canada are booming, many aren’t doing so well, according to a new report. Susan Miliuscovered the ups and downs of avian populations in “North American bird update has a little good news” (SN: 11/1/14, p. 4).

“It is an impressive increase of the wetland-inhabiting species, but the continuing decline of birds inhabiting the other habitats is worrying,” wrote commenter mudfooted.

Birds that live in deserts and other arid areas are showing the steepest declines, with populations dropping by 46 percent since 1968. Dan Midgett wondered why: “It’s not as if humans are competing for that habitat much.” Reader Daxx2513 had a potential answer: “Actually, the Southwest has the fastest growing population in the country. More than the actual space, it’s the human hoarding and overuse of available water in those areas that is stressing the system.”

“Satellites expose mysteries of the deep ocean” (SN: 11/15/14, p. 7) identified the ocean-monitoring Jason-1 satellite as a NASA mission. Edward A. Henry correctly pointed out that the satellite is a joint venture between NASA and the National Centre for Space Studies in France.