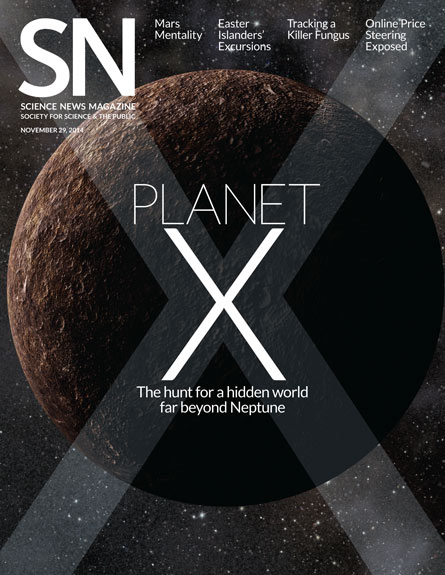 Successful long-term space journeys — like the one that awaits any astronauts heading to Mars — will hinge on good teamwork. Bruce Bower described what it would take to handle the psychological pressures of an extended space mission in “Extreme teams” (SN: 11/29/14, p. 22).

Elizabeth R. Hatcher is convinced that grasping group psychology is key to prepping astronauts for deep space travel. “Without the incorporation of such understandings into every step of project development, management and execution, I have difficulty imagining people traveling through space for months, deprived of everything tangible that they have ever cared about, interacting with each other throughout the mission and returning safely and sanely to planet Earth.”

David M. Fishel said that the best teammates are those who can manage relationships, divvy up responsibilities and selflessly work toward common goals. “Let’s see, based on human history and human nature, who of us is best suited for deep space exploration? Certainly not men! My wife would like to know from the various studies’ authors just which of the above traits men exhibit in equal parts with women,” he wrote. “As a male human being and a thinking person who’s also well aware of his, shall we say, ‘male foibles,’ I’m forced to agree with my lovely wife, and conclude it’s best for our species’ future that we leave space exploration up to women!”

“Looks like a caption competition to me,” tweeted @benfriman after seeing a photo of penguins regarding a researcher-devised robochick (SN: 11/29/14, p. 16). Some readers accepted the challenge. 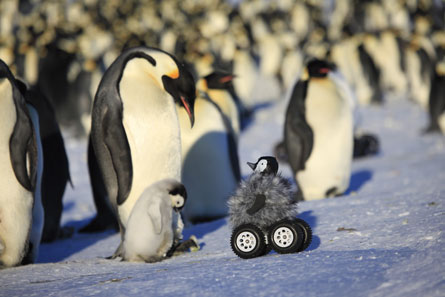 “Jim, humans are trying to fool us again, do something.”
@Cyborgwolf

“What the hell are you doing?”
“This is how I roll.”
@AlfredTarski

“Make sure you have her home by dark. Oh wait, that’s six months from now!”
@goblue1152

Some of the oil from the 2010 Deepwater Horizon disaster is missing in action. Scientists may now know where it went, as Beth Mole explained in “Oil from BP spill sits on seafloor” (SN: 11/29/14, p. 16).

Oil is less dense than water, so the idea of it settling near the bottom of the ocean confused some readers. “Shouldn’t it float?” asked Gary Baker.

Two major factors kept some of the Deepwater Horizon oil from surfacing, says lead author David Valentine of the University of California, Santa Barbara. First, oil shot out of the well with such force that some of it fragmented into tiny droplets. They were too small to push through the cohesive forces that hold water molecules together and were trapped below the surface. Second, some components of the oil are water-soluble and simply dissolved in the surrounding ocean.

Soil-dwelling bacteria, and not leaky gas wells, are the culprits behind methane that’s seeping into groundwater in an Ohio county, Thomas Sumner reported in “Fracking not linked to contamination” (SN: 11/29/14, p. 11).

Some readers were cautiously optimistic at the news: “Finally, we have some real science,” wrote Marcus Landry. “Hysteria has ruled over the last few years and it’s nice to see some sanity brought into the mix. This doesn’t mean 100 percent of all the fracked wells are clean, but it does mean that a leaking well is a rare thing, just as I had suspected all along.”

Others called for more research. “People need to be careful not to read into this more than what it says. It gives a good baseline for this particular situation and that is very important. Drawing widespread applications or predictions from this would be as premature as calling an acorn an oak tree,” wrote commenter Sukie.

But some, like ru899091, don’t view the study as evidence that fracking is safe. “To me, the most important issue is that when fracking goes wrong, are we capable of fixing the problems? I say we are not.”

“Not-so-sweet sweeteners” (SN: 11/29/14, p. 30) described sucrose, also known as table sugar, as a mixture of glucose and fructose. Reader Ronald Swager correctly pointed out that sucrose is a compound, not a mixture.