A partial upper jaw and two lower jaws, one recovered in two pieces, belonged to Australopithecus deyiremeda, says a team led by paleoanthropologist Yohannes Haile-Selassie of the Cleveland Museum of Natural History. These finds support the view that two or more hominid species coexisted in East Africa before the dawn of the Homo genus, the researchers report in the May 28 Nature.

“The $64 million question is, what environmental and ecological factors triggered hominid species diversity between around 4 million and 3 million years ago,” Haile-Selassie says.

The species name deyiremeda means “close relative” in the language spoken by people who live near the fossil site.

Fossils from A. deyiremeda turned up about 35 kilometers north of where Lucy’s 3.2-million-year-old remains were found in 1974 (SN Online: 10/28/14). Other fossils from Lucy’s species, Australopithecus afarensis, date to between about 3.8 million and 2.9 million years ago.

Several features of the new fossils, including forward-situated cheeks, resemble those of a comparably ancient East African hominid, Kenyanthropus platyops (SN: 3/24/01, p. 180), writes paleoanthropologist Fred Spoor of University College London in the same issue of Nature. But A. deyiremeda looks more like Lucy’s species at the front of the jaw, Spoor says. 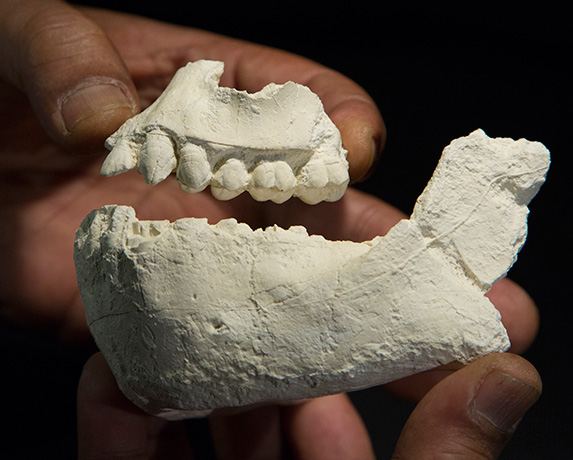 Casts of fossil jaws and teeth from a newly proposed hominid species, A. deyiremeda, show key differences from corresponding finds assigned to Lucy’s species, scientists assert. These contrasts in anatomy include thicker-boned jaws, thicker tooth enamel and smaller teeth at the front of the mouth in the new species.

A partial jaw and tooth belonging to another hominid from around Lucy’s time, Australopithecus bahrelghazali (SN: 12/15/12, p. 14), are too fragmentary for comparisons, he says. Researchers found those fossils in Chad, a Central African nation.

Some investigators see the new fossils as representatives of Lucy’s kind, not a separate species. Paleoanthropologist Tim White of the University of California, Berkeley says that A. deyiremeda, K. platyops and A. bahrelghazali show only minor differences from the skeletal pattern observed in nearly 400 A. afarensis fossils discovered over the last 40 years. “Lucy’s species just got a few more new fossils,” he says.

If current loose standards for defining hominid species were applied at the San Diego Zoo, “each mammal species would need five more cages,” White says. “The public would be confused and the mammals would no longer be able to mate.”

Haile-Selassie’s team discovered what they regard as A. deyiremeda fossils where eroding soil had revealed the jaws. Dating of the finds rested on age estimates for volcanic ash just below fossil-bearing sediment. Soil measurements of reversals in Earth’s magnetic field and calculations of how fast soil accumulated at the site further refined the fossils’ age.

A. deyiremeda displays generally small teeth and signs of a nearly flat face, much like early Homo species. But traits such as sturdy jaws and thick tooth enamel recall Paranthropus, an African hominid line that existed from about 2.5 million to 1 million years ago.

A 3.4-million-year-old partial fossil foot previously discovered near the site of the new fossils might belong to A. deyiremeda, he adds. If so, then members of that species walked more clumsily than Lucy did, due to flat feet and grasping, gorilla-like big toes (SN: 5/5/12, p. 18). If not, then a third Australopithecus species may have inhabited the region.

A. deyiremeda might have been an ancestor of Homo, Paranthropus or Australopithecus africanus, a southern African hominid from roughly 3.3 million years ago, Haile-Selassie suggests.