Finally, physics’s zoo of subatomic particles is full. Scientists have almost certainly snared the Higgs boson, the last particle waiting to be roped into the fold.

Decades after it was proposed, the Higgs emerged in the shards of particle collisions at the world’s most powerful accelerator, the Large Hadron Collider at the CERN laboratory near Geneva. Physicists announced the discovery on July 4 during a seminar at the lab.

“We have now found the last missing cornerstone of the standard model,” said Rolf-Dieter Heuer, CERN’s director-general. “It’s the beginning of a long journey to investigate all the properties of this interesting particle.”

The particle’s mass is around 125 billion electron volts, or about 133 times the mass of a proton. CERN captured the Higgs in two huge experiments, each of which independently reached the gold-standard statistical level for confirming the particle’s discovery.

One of the theorists who first proposed the particle nearly five decades ago joined in the all-around congratulations. “It really is an incredible thing that it’s happened in my lifetime,” said Peter Higgs of the University of Edinburgh.

In one respect, finding the Higgs simply confirms the standard model, physicists’ framework for understanding the particles that make up the universe and the forces that govern them. But the discovery also opens new areas to explore, including alternate versions of the standard model that could explain some of the biggest unanswered questions about the cosmos.

The Higgs traces back to 1964, when several physicists independently dreamed up the idea of an energy field that would have permeated the early universe (and persisted to the present). “In all honesty we were trying to solve a more modest problem,” said theorist Carl Hagen of the University of Rochester in New York. In certain theoretical calculations, particles with zero mass kept inconveniently popping up: In trying to get rid of those particles, Higgs, Hagen and others realized that once the universe cooled enough from its initial Big Bang, this energy field would have had to emerge.

Like a puddle of molasses, the field resists the motion of particles moving through it. Such resistance to motion, or inertia, is the defining quality of mass. Subatomic particles therefore acquire differing amounts of mass depending on how strongly they interact with the energy field.

Known as the Higgs field, its existence also required a new particle — the Higgs boson. (Bosons are a class of fundamental particles defined by their quantum properties.) Finding the Higgs was a major goal of the Superconducting Super Collider, an atom-smasher that was being built beneath Waxahachie, Texas, when the U.S. Congress canceled it under budget pressures in 1993. The Fermi National Accelerator Laboratory, in Batavia, Ill., also chased the Higgs until shutting down its biggest machine last year.

Today, CERN scientists hunt the Higgs by smashing two beams of protons together at the $10 billion LHC. Out of a trillion proton-proton collisions, perhaps one will create a Higgs particle, which then decays almost instantaneously into other particles. Sensitive detectors placed at the sites of these smashups look for signatures of several ways the Higgs might have decayed. “It’s not a needle in a haystack — it’s much worse than a needle in a haystack,” said Joe Lykken, a theoretical physicist at Fermilab.

If each of the LHC’s 500 trillion collisions were represented by a grain of sand, they would fill an Olympic-sized swimming pool, said Joe Incandela, a physicist at the University of California, Santa Barbara and a spokesman for one LHC experiment. Yet the grains from the signals of interest — the possible Higgses — would cover only the tip of your finger.

Both experiments looked at multiple ways the Higgs could decay, such as into two photons or into two Z particles.

One of the LHC’s two main detectors, the CMS experiment, found signs of a particle with a mass of 125.3 billion electron volts, plus or minus 0.6 billion electron volts, Incandela said. The statistical strength of a signal is measured by a quantity called sigma: A five-sigma result, considered the standard to claim a discovery, means there is a 1-in-3.5 million chance that a statistical fluke could have created a signal of that magnitude or greater.

In three of five decay paths studied, CMS found the Higgs with a statistical significance of 5.1 sigma. Adding in the other two channels, which have relatively little data, lowered that to 4.9 sigma — but the results are still consistent with a Higgs being there, said physicist Elizabeth Simmons of Michigan State University.

The competing ATLAS experiment spotted a new particle with a mass of 126.5 billion electron volts, with a statistical uncertainty at a 5.0 sigma level when combining the decay paths it examined. Independent physicist Philip Gibbs combined data from both ATLAS and CMS, using only the decay in which the Higgs produces two photons, to come up with an unofficial six-sigma signal.

The Higgs masses found by both experiments are consistent with one another given the uncertainty ranges in each measurement, said ATLAS spokeswoman Fabiola Gianotti (though she did not give a numerical error range for her experiment). Both teams will also present their work this week at the International Conference on High-Energy Physics in Melbourne, Australia.

“It’s a great day for particle physics and it’s really a profound discovery about how nature works,” said Pier Oddone, director of Fermilab.

How the Large Hadron Collider works 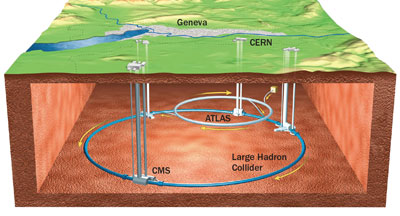 Buried up to 175 meters deep beneath the French-Swiss countryside, CERN’s premier particle accelerator hurls two beams of protons headlong into one another (arrows show paths). When they collide, the enormous energies generate other particles — including, presumably, the Higgs — that flash into existence, and then decay almost immediately. Giant detectors including the Compact Muon Solenoid (CMS) and A Toroidal LHC Apparatus (ATLAS) analyze the particle debris to determine what happened during the smashups.

CERN won the transatlantic race to find the Higgs after Fermilab’s proton-antiproton accelerator shut down last September. On July 2, in their final analysis, Fermilab physicists reported that their data could narrow the Higgs mass range only to between 115 billion and 135 billion electron volts, with a statistical significance of 2.9 sigma (

Now that the Higgs has almost certainly been found, scientists are looking forward to learning more about it. So far, the particle seen in the experiments looks like the Higgs as predicted by the standard model, Heuer said, but slight differences could still exist. He compared the task to trying to determine from afar if a person approaching is your best friend or your best friend’s twin. Only when the person gets close enough can you determine which one it is. LHC measurements should soon reveal whether the particle’s properties match those predicted by the standard model, or whether new physics might be at work.

“Confirmation of theory is satisfying, but it would be more eventful if there were significant disagreements and controversies to resolve,” said Frank Taylor, an MIT physicist who works on the ATLAS collaboration.

One well-loved extension of the standard model is a theory known as supersymmetry, which holds that all known particles have a heavy supersymmetric partner as yet unseen. The concept opens up all sorts of areas to explore. Some versions of supersymmetry, for instance, predict that at least five kinds of Higgs boson should exist, although only the lightest would be detectable at the LHC. Other supersymmetric particles may account for dark matter, the mysterious stuff that makes up most of the matter in the universe but which scientists have yet to identify.

If supersymmetry is right, the LHC has a shot at detecting many of these new particles as it continues its Higgs-refining quest. “It’s the path to answer these other questions,” said Gordon Kane, a theoretical physicist at the University of Michigan whose work has predicted a Higgs in the mass range found.

Fermilab’s Rob Roser said far more is yet to come from the LHC. “They’re in a new regime of energy and statistical precision, and this may not be the only surprise we have this year from them.”