When baseball slugger Mark McGwire of the St. Louis Cardinals hit his record-breaking, 62nd home run on Sept. 8, 1998, the ball barely passed over the left field fence at Busch Stadium in St. Louis. The same hit would not have been a home run at, say, Fenway Park in Boston. 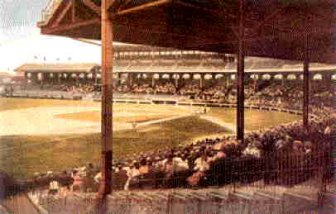 This episode suggests an interesting question: How hard is it to hit a home run in different ballparks?

To compare ballparks, mathematician Howard L. Penn of the United States Naval Academy determined the average initial velocity required for a baseball to clear the fence in various stadiums. To do so, he turned to a rule of thumb first derived by Edmond Halley (1656–1742) in 1686.

In a paper presented to the Royal Society of London, Halley used calculus to determine how gunners could aim a cannon and find the proper powder charge to send a projectile to a given target. Halley’s “rule” gives a relationship between the angle of elevation and the minimum initial velocity required to reach a target at a certain height. That angle of elevation is half way between 90 degrees and the angle of the target as seen from the launch point.

Given the distance and height of a wall, you can then use Halley’s gunnery rule to calculate a home-run ball’s minimum initial velocity. Penn determined this velocity for left, left center, center, right center, and right field for each of the major-league ballparks. “Averaging these numbers gives a theoretical measure of the difficulty of hitting home runs in each park,” Penn says.

Interestingly, there wasn’t a great deal of variability among the ballparks. Initial velocities ranged from a low of 106.96 feet per second at Milwaukee County Stadium (demolished in 2001) to a high of 110.82 feet per second at Coors Field in Denver.

Penn then compared the number of home runs hit by a team playing at home with the number hit by the same team on the road during a given season. One ballpark stood out. “Coors Field was way out of line,” Penn says.

At Coors Field in 2001, for example, Rockies hitters slugged 58 percent of all their home runs at home. At the same time, visiting-team hitters accounted for 60 percent of all the home runs served up during the season by Rockies pitchers. Comparable disparities were also evident in the data for 1999 and 2000.

So, for Coors Field, other factors (particularly altitude) far outweigh field dimensions in determining home-run success. Indeed, because of the altitude, a baseball travels about 10 percent farther at Coors Field than it does elsewhere, Penn estimates. The effect would be even greater at a higher and warmer place, such as Mexico City.

Overall, the year-to-year data for a given ballpark were fairly consistent, though some anomalies did show up. In 1999, for instance, the Anaheim Angels apparently suffered abysmal hitting and pitching at home.

In general, Penn notes, the plethora of statistics available for baseball makes this sport an excellent candidate for student exercises that involve hypothesis testing on real-world data.