Great architecture makes a difference even to ants.

Take a typical colony of 10,000 or more true harvester ants (Veromessor andrei). They live in an underground nest of flattened chambers connected by skinny tunnels. In a new study of these complicated arrays, having more tunnel connections is what matters for worker collective performance, not more space or nest volume, says Noa Pinter-Wollman of the University of California, San Diego.

The more satellite chambers that are connected to the main entrance chamber, the faster the worker ants converge on a food find, Pinter-Wollman reports October 21 in Biology Letters. And the more alternate routes that ants can take between pairs of chambers, the faster the foragers arrive at food. She didn’t see the same speed-up as the volume of the chambers increased, despite the potential to hold more ants.

Analyzing how insects organize their large colonies might inspire social innovations for human societies, says Jennifer Fewell of Arizona State University in Tempe, who studies the evolution and ecology of social groups. Much as studying gecko toe pads has sparked ideas for new adhesives (SN Online: 11/18/14), looking at colony functions honed by evolution opens a new, social frontier for biomimicry. 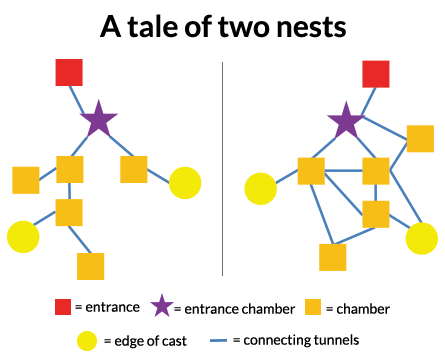 Schematics of two ant nests show differences in what’s called meshedness, or the availability of connections that join chambers (orange squares) in a loop. These loops, called cycles, are particularly important around the nest entrance (red square) and entrance chamber (purple star). The nest on the left shows low meshedness, but the nest on the right nest ranks high.

Pinter-Wollman chose to study V. andrei harvester ants because colonies readily switch nests, as frequently as eight times in two months. Seeing the same colony change behavior after a move let her argue that the nest, not the ants themselves, made the difference.

Moving is easy in the swath of California chaparral where Pinter-Wollman works. “It’s actually like a Swiss cheese of nests,” she says, with only about one of 15 or 20 occupied at any time. Why the ants move so much isn’t clear. Switching to a different home might ease competition with too-close neighbors or offer fresh resources after depleting those in the old neighborhood, she speculates.

When ants changed nests, Pinter-Wollman found that collective behaviors (rushing to help bring home bits of a windfall) were more likely to change than individual ones (the speed of bringing a seed back to the colony). She and her helpers investigated which features of nest architecture might enhance or sap collective behavior by setting pieces of apple in front of various colonies. The researchers then counted the number of ants on the apple at one-minute intervals over a 20-minute period.

Her team then poured plaster into nests (after ants had moved on), let the flow harden and dug out the lumpy, spiky structures representing the quirks of nest architecture. “People tell me they look like coral,” she says. The casts allowed her to compare how briskly ants mustered their mass of foragers with nest traits.

Pinter-Wollman treated the arrays as networks, with chambers as nodes connected by tunnels. She calculated how well-connected each nest’s entrance chamber was to other chambers. Increases in three measures of this connectivity, including the mean number of entrance chamber connections and the redundancy of those connections, correlated with increases in ants’ mustering speed.

Boosting connections could speed recruiting of foragers in several ways, Pinter-Wollman says.  Workers inside the nest could have more opportunities to sniff returnees smelling of, and carrying, food. The indoor ant needs to perceive both before venturing out herself.

Fewell relishes the connection between ant and human architecture. “Something as simple as placing people on a different floor or in a different building can have a profound effect on informal communication and thus a sense of connectivity,” she says. “Ant nests almost seem designed to create issues with individuals running into each other.”

The entrance chamber, well-connected or not, is a vital place for meeting nest mates and getting information for decisions, says Pinter-Wollman. “It’s like a kitchen,” she says. “Or the water cooler.”