Little springs made of a metal alloy found in fancy eyewear can scale up gecko-style sticky power and enable a human to climb a glass wall.

Tiny hairs on gecko toes do a great job of keeping the little lizards from dropping off a ceiling, but gecko-inspired adhesives can get overwhelmed by human-sized burdens. A new way to overcome that challenge is suspending the larger-than-lizard weights with the aid of special metal springs, says designer Elliot W. Hawkes of Stanford University. The basic idea of using the springs should apply to other adhesives and many other gripping tasks, he and colleagues report November 19 in Journal of the Royal Society Interface.

Hawkes can work his way up a glass wall using a climbing device based on arrays of sticky tiles, each rigged with a spring made of the nickel-titanium alloy nitinol. 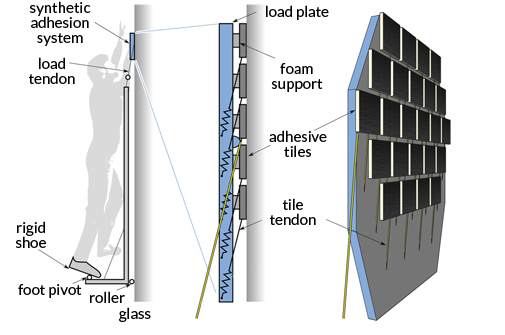 Side-views of a gecko-inspired wall-climber (left) shows hand-held plates of adhesive tiles sticking against a wall as the climber’s foot bears down on a step dangling from the plate. Shifting weight off one step to its mate on the other side unsticks the adhesive and lets the climber move the plate upward for the next grip. Close-ups of the plate (middle and right) show the arrays of sticky tiles that bear shares of the climber’s weight and are evenly distributed by the stretchy springs in the tendons.

Geckos manage adhesive marvels thanks to vanishingly small hairlike setae that expand the surface area of their toes enough for van der Waals forces to cling to a surface. The last time he checked, Hawkes says, 384 scientific papers have discussed gecko-inspired adhesives, and labs have developed plenty of variations. Scaling up to human weights has been difficult. The DARPA Z-man project released pictures this summer of a person climbing with a gecko-style adhesive but did not release details of the structure.

Hawkes, study coauthor Mark R. Cutkosky and colleagues, who had worked on an initial stage of the Z-man project, developed a wall-climbing robot called Stickybot, which relied on gecko-inspired adhesives. But at the robot’s scale, the adhesives didn’t perform as well as they do for the dainty little lizards. “As an engineer, it bugs you,” Hawkes says. When he, Cutkosky and colleagues began working on a NASA project for a grabber to gently snag debris in space, the researchers took a new look at the scaling problem.

After working through a system of squishy pads and other alternatives, Hawkes turned to nitinol, which has the unusual property of growing stretchier as the force pulling it increases. That’s the opposite of rubber bands and various other elastics.

Hawkes worked with the basic design concept of a gripping pad covered with rows of postage stamp–sized tiles of a gecko-inspired silicone adhesive nicknamed PDMS. Tiles inevitably vary slightly in their sticking power, and as loads get heavier certain ones end up carrying more of the load than their neighbors. When overburdened tiles fail, the whole pad loses its grip. To even up the load, Hawkes and colleagues developed a way of supporting the weight by attaching a nitinol spring to each tile. The natural changes in the spring stretchiness distribute the weight more evenly without overloading particular tiles and starting a slip.

“Impressive,” says engineer David J. Carter of the nonprofit Draper Laboratory in Cambridge, Mass. He served as program manager for the Z-Man climber, which faced the same challenge of scaling up nature’s adhesive at least 500-fold to support human weight.

RIGHT UP THE GLASS  Researcher Elliot W. Hawkes carefully climbs a glass wall using a wall-climber based on arrays of gecko-inspired adhesive tiles with stretchy springs to distribute his weight.  Diagrams appearing beside his image show some of the details of the device. Credit: E. Eason