Laughter’s evolutionary story may be written on chimpanzees’ faces.

Chimps at play make open-mouth facial expressions while either laughing out loud or staying silent, say psychologist Marina Davila-Ross of the University of Portsmouth in England and her colleagues. These results suggest for the first time that a nonhuman primate can use facial expressions to communicate without making a sound, the researchers report June 10 in PLOS ONE.

Muscle movements in chimps’ laughing faces resemble those of humans in many ways, Davila-Ross’ team says. People’s mirthful facial expressions, sometimes paired with laughter, evolved from a simpler connection between open-mouthed expressions and laughter in ape ancestors of humans and chimps, the scientists propose.

“Our study provides evidence that chimps can communicate during play in versatile ways with open-mouth expressions that have the same evolutionary origin as human laugh faces,” Davila-Ross says.

Researchers have long known that chimps and other apes produce their own brand of laughing when playing or being tickled. Humans laugh when exhaling, typically producing a “ha ha” or “he he” sound. Lacking that degree of breath control, chimps laugh while exhaling and inhaling, resulting in a loud panting sound.

Neuroscientist Robert Provine of the University of Maryland, Baltimore County has long suspected that human laughter evolved from labored breathing during rough-and-tumble play of a common ancestor of people and chimps. “What’s novel in the new study is that chimps’ facial expressions have been linked with their laughter,” Provine says. 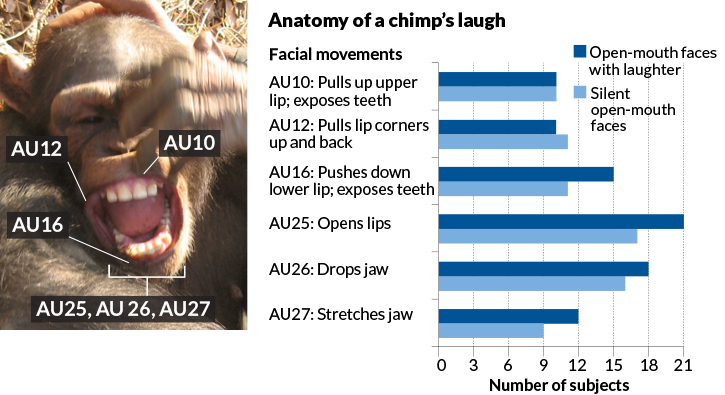 A chimp displays one set of facial-muscle movements used for open-mouth expressions. Each of those movements, with or without laughing, appeared in varying numbers of chimps at play in an observational study.

Two individuals trained in deciphering facial-muscle movements, who knew nothing about the study’s aims, analyzed video recordings of 46 chimps playing in pairs at the Chimfunshi Wildlife Orphanage in Zambia. A standardized method called ChimpFACS was used to measure 10 facial-muscle movements previously linked to these animals’ open-mouthed faces. ChimpFACS was developed from a similar system for rating human facial expressions.

Videos yielded 150 silent, open-mouthed faces of 17 chimps suitable for measuring. Another 150 open-mouthed faces with audible laughing, made by 21 chimps, were also analyzed. The chimps produced the same 14 open-mouth expressions whether they were laughing or silent. Each expression consisted of between two and five separate muscle movements.

These expressions most commonly consisted of parting the lips and dropping the lower jaw, and in some cases also pulling down the lower lip.

Chimps tended to mimic partners’ open-mouth faces with laughter but not their silent laugh expressions.

Laughing chimps rarely raised their cheeks, a common facial movement in laughing humans that causes lines to form at the eyes. Raised cheeks enhance the positive appearance of a laughing human face.

These types of faces do appear to be less meaningful to chimps than open-mouth faces accompanied by laughter, Davila-Ross acknowledges. But the ability to produce facial expressions while remaining silent expands the potential range of social communication. Humans have greatly elaborated on an ancient facility for nonverbal facial communication, she suspects.