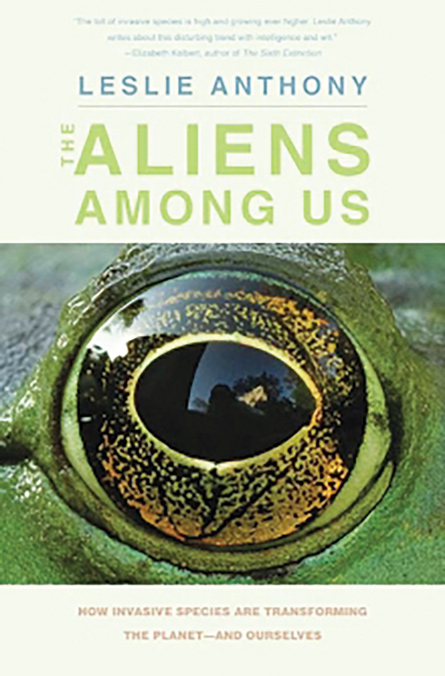 The Aliens Among Us
Leslie Anthony
Yale Univ. Press, $30

Remote Bouvet Island, a tiny, glacier-smothered landmass in the South Atlantic rimmed by 500-meter-tall cliffs, has a notable distinction: It’s the only known spot on Earth, scientists say, that has zero invasive species. Every other place, and every person, on the planet is at least indirectly affected by one or more species that has been transported — either intentionally or inadvertently — to new lands from the ecosystems in which the species evolved.

In The Aliens Among Us, biologist and science journalist Leslie Anthony chronicles the detrimental effects of invasive species, as well as how these organisms spread and how they can be fought. In the United States, such interlopers — everything from zebra mussels in the Great Lakes to Burmese pythons in the Everglades — damage crops, infrastructure or otherwise cost taxpayers about $145 billion annually.

Invasive species, Anthony writes, are “children born of globalization and consumerism.” Their numbers increase as international trade widens and accelerates. Some species surreptitiously hitch a ride to their new homes on human transport: Think seeds and burrs on hikers’ clothing, or fish in ballast water of cargo ships. Others have been deliberately released, like earthworms or baitfish set loose by fishermen, or exotic lizards and snakes set free by careless pet owners. Rats, the world’s foremost invasive species, have traveled the world with explorers and traders; so have tropical fire ants, which genetic studies suggest have hitchhiked from southwestern Mexico to Asia and beyond starting in the 16th century in soil used as ballast in Spanish ships.

The Aliens Among Us is a thoroughly engaging book that draws from Anthony’s fieldwork and interviews with scientists, community volunteers, government researchers and policy makers. These groups are struggling to intercept species before they establish a beachhead on new shores, as well as eradicate those that have already gained a foothold. Discussion of people fighting the spread of Zika virus and other exotic diseases — big threats despite their minuscule size — makes the book especially timely.

Some battles against invasives seem almost doomed to fail. Besides the inexorable increase of trade, the inescapable specter of climate change continues to open new vistas for species to colonize (SN: 12/24/16, p. 23).

Buy The Aliens Among Us from Amazon.com. Science News is a participant in the Amazon Services LLC Associates Program. Please see our FAQ for more details.