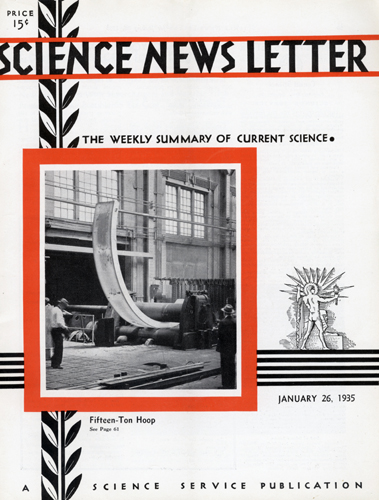 Rolling supplants casting in the fabrication of the rims for hydroelectric turbines such as the one General Electric Co. is building for the Kanawha Valley Power Company in Virginia. Twenty-seven feet long and weighing 15 tons, the giant slab of white-hot metal is being rolled into semicircular shape. Formerly, such large structures were cast to their half-circle design.

High-altitude flying is the only apparent way of reaching the high cruising speeds demanded of present passenger aviation and at the same time obtain economical operation, says W. Bailey Oswald of the Douglas Aircraft Co. in The Journal of the Aeronautical Sciences (Jan.)

The future promises high-speed flying at altitudes up to 40,000 feet with costs equal to or less than those of present-day low-altitude flights, predicts Mr. Oswald.

In his extensive report showing that high-altitude flights are sound both from the engineering and economy sides, Mr. Oswald indicates that by using the newest-type planes with super-chargers and variable-pitch propellers it is possible to obtain a 69 percent increase in cruising speed with an increase of only 6 percent in operating costs. This high ratio of speed gain to operating-cost increase is possible for planes cruising at 40,000 feet.

Where do the enormous energies observed in cosmic rays come from? Newest of all problems in atomic science is to figure out how the ray energy is released.

Cosmic rays have been observed, for example, so energetic and piercing that they pass through nearly 2,000 feet (600 meters) of seawater.

Prof. A.H. Compton, American Nobelist now at Oxford University, England, has published an estimate in Nature (Jan. 12) that some of the most piercing cosmic rays have energies of 600 billion electron volts.

Such great evidences of energy, Dr. Compton points out, cannot come from the release of the energy equivalent to the mass of most atoms known on Earth.

It would require atoms from 100 to 1,000 times as heavy as those of hydrogen to produce such rays by exploding. Heaviest of all atoms on Earth are those of uranium, weighing only about 238 times as much as hydrogen.

Dr. Compton pictures such rays as primary ones coming in from outer space and not as secondary ones created in the Earth’s atmosphere. They cannot, definitely, be photons of radiations.