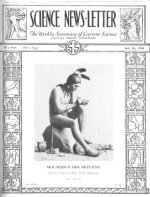 DID THE MOUNDBUILDERS COME FROM MEXICO?

Were the Indians who built the mysterious mounds of the great interior valley of our country kinsmen to the Mayas of Yucatan and the other highly cultured peoples of the Mexican plateau?

Are the decidedly Maya- and Aztec-like sculptures taken from mounds in the Southeast really witnesses to an evolution from the same racial stock and an inheritance of the same art traditions, rather than just evidences of an ancient commerce with the countries across the Gulf of Mexico?

Dr. H.C. Shetrone, director of the Ohio State Museum at Columbus and one of the most active investigators of Indian mounds in America, thinks it not unlikely that the vanished people who built the great earthen monuments came as a great wave of migration from the south. They deployed over the Mississippi valley, overran the Gulf coastal plain southward to peninsular Florida, they penetrated to the Great Lakes region. They developed several different cultures, or types of civilization, as they spread abroad through the great land that was open to them, and the outer edges of the spreading wave became less and less like the original comers in their ways of living, while the group nearest the ancient homeland remained more like the stay-at-home descendants of their own forefathers.

BACTERIA–CHIEF CHEMISTS OF THE SOIL

Every plant that sends its roots down into the soil gathers to itself a great crowd of microscopic hangers-on, like the vassals around a baron of old. It greatly promotes the growth of soil bacteria, and to a less degree it encourages fungi and other soil microbes. Studies of this condition were reported this week before the Second International Congress of Soil Science at Leningrad, by Prof. Robert L. Starkey of the New Jersey Agricultural Experiment Station.

Plants seem to produce a substance or substances through their roots, that bacteria find available for their needs, for the microorganisms grow thickest in immediate contact with the roots and are much scarcer a fraction of an inch away, Prof. Starkey found.

Is the average sea level of the Atlantic Ocean slowly but steadily rising so as to engulf land along the coast?

Fresh discussion of this question has been aroused by the publication by the National Research Council of a bulletin on mean sea level, written by Prof. Douglas Johnson of Columbia University. This bulletin contains a record made over a long period of years of the level of the sea at Fort Hamilton, N.Y., near New York City. Prof. Johnson interprets the figures as indicating that, while the sea level varies greatly from year to year due to weather changes and changes in the outline of the coast, there is no appreciable, progressive change. In other words, if your seaside property becomes submerged, the fault is not with a gradually sinking continent.

However, Prof. Alfred C. Lane and Prof. William F. Cheney, Jr., of Tufts College, disagree with Prof. Johnson’s conclusion. Using the same data, but a different method of mathematical computation, they deduce that the sea level is rising at an average rate of one foot in 214 years.