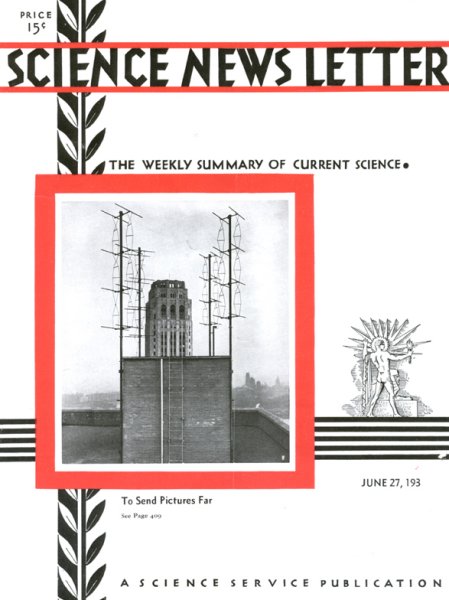 Few happenings in science so aptly illustrate the progress of the last century as do the contrasts between Prof. Samuel F.B. Morse’s telegraph of 1836 and the newest short radio wave facsimile transmission system recently demonstrated between New York and Philadelphia.

Moreover, and strikingly characteristic of the newest development, the 3-meter wavelength communication system sends whole messages as exact facsimiles of the original message. If the message is written in longhand, the message received is a replica and one easily recognizes the handwriting of the sender. Whole drawings, maps, fingerprints, and all similar pictures are as easily transmitted.

At the receiving end the drawings are made automatically by an apparatus that operates at 120 lines to the inch, giving detail far better than the coarse, 55 line-to-the-inch engraving screen of ordinary newspaper pictures.

Production of a film—chemical, not cinematic—100 times thicker than most chemists thought could exist is announced by Prof. William D. Harkins and Dr. Robert J. Myers, of the University of Chicago.

Films possible in surface chemistry have been thought to be not more than one molecule thick. The Chicago scientists have announced that their films are from 2 to 100 molecules thick.

Significance of the discovery is that scientists hope to find more facts about the films, which cover many parts of the human body and brain.

“Without these films and related membranes life would be nonexistent,” said Dr. Harkins. “The motion of the muscles, the behavior of the nerves and the brain itself, and the characteristics of the blood and all the cells of the body are dependent upon the action of such films.”

On the sidewalks of New York some 45,000 to 60,000 persons go to work and to play unaware of the fact that they have diabetes mellitus.

If they only knew they had the disease and could have proper medical treatment for it in its early stages, the course and length of their lives would be quite different, in the opinion of Dr. Arthur Martin Tiber, physician in charge of the diabetes clinic at Bellevue Hospital, the largest general charity hospital in New York City.