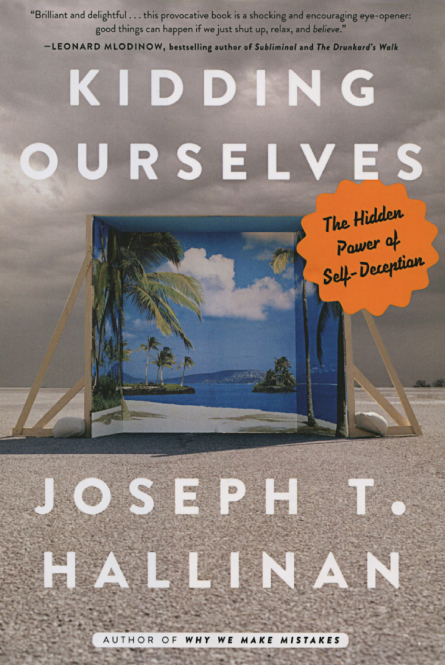 People believe the darnedest things — despite doubts, common sense and even evidence to the contrary. For example, a large majority of people are convinced that they drive better than others do, which of course isn’t possible. We can’t all be above average, no matter what Garrison Keillor says.

Hallinan, a Pulitzer Prize–winning journalist, argues that all manner of strange beliefs distort people’s perceptions and give rise to strong expectations, overconfidence, superstitions or just a rosy view of oneself. These beliefs are not all bad. Take, for instance, the placebo effect. When researchers gave some people fake acupuncture with toothpicks and poked others with real needles, the groups reported about equal improvement in back pain. They expected to feel better and did.

And in other ways, believing is perceiving. In surveys, many people who say they have never used a government social program are in fact on Medicare or Social Security. Cornell University researchers found that one-fourth of people who had been on food stamps claimed they had never received government assistance. They perceived themselves as self-supporting even when they weren’t.

It feels better to be in charge. “We all want to believe that we control the direction of life’s pinball,” Hallinan says. It puts us a little more at ease. As an example, he offers superstition.

People keep superstitions in a back pocket, hiding them from the rational mind. These beliefs provide an edge, some tiny degree of control. Barack Obama played basketball on election days because it “worked.” Some baseball players tap their helmets before hitting, and back on the bench they never ever talk to a pitcher who’s throwing a no-hitter. Even though grown-ups rule the world, elevators manufacturers rarely build in a 13 button, because most buildings have no 13th floor.

A smidgen of extra control is a good thing, and having too little carries a real downside. British researchers discovered that civil servants who were low in the power structure had more job stress. They lacked control and ultimately died younger on average than higher-ups.

So a dose of self-deception might work to our advantage. At the high end of the job ladder, powerful people flood themselves with optimism, bold action and bullishness. It drives them to leadership positions and helps them achieve goals.

But too much of even this good thing carries the risk of becoming slightly poisoned by power. It’s common for such high achievers to adopt an attitude best summed up as, “I won’t get caught.” Cases in point include John Edwards, Lance Armstrong and Richard Nixon. They had power and lots of control and surely assumed bad things would happen to others, not them. They were, in effect, kidding themselves.