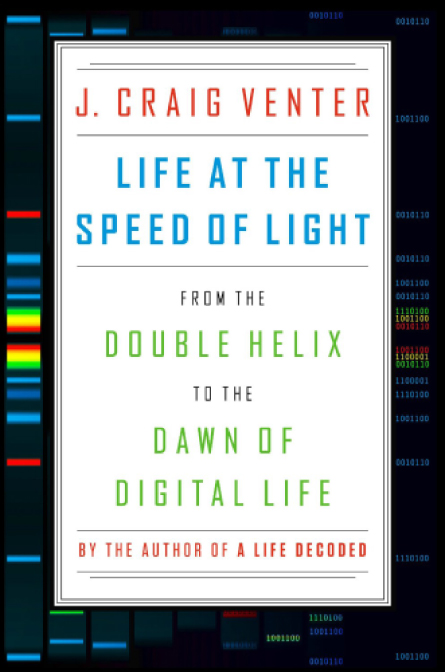 Biology has come a long way from the days of mixing things in petri dishes and hoping something interesting happens. In his new book, Venter introduces readers to a future of precise biological engineering, guided by DNA and targeted to create life forms never before thought possible.

Venter has the scientific chops to back up these claims. His first book related the story of how he led a private effort that raced a government-funded consortium to decipher the DNA sequence that makes up the human genome. His second book focuses on a later lab triumph: the creation of Synthia, the first life-form with a synthesized genome.

Synthia, announced in 2010, is a bacterial mash-up. Venter’s team stitched together a genetic code for one bacterial species from scratch, then inserted it into a second species and booted it up. The result was a living, self-replicating cell that essentially cribbed synthetic DNA to function.

In relating Synthia’s story, Venter illuminates the twists and turns that are a hallmark of modern science. Time and again the researchers go down blind alleys, only to start again using a different tack — such as ditching one simple but slow-growing bacterial species in favor of another more complex one that will replicate faster in petri dishes.

This description of science-as-process is perhaps the most notable aspect of Life at the Speed of Light. Venter embeds the story of Synthia in the deep history of molecular biology, laying out discoveries by previous generations of scientists and clarifying how those advances made way for modern investigations. It’s a story with many blind turns and dead ends, but one that triumphs in the end.