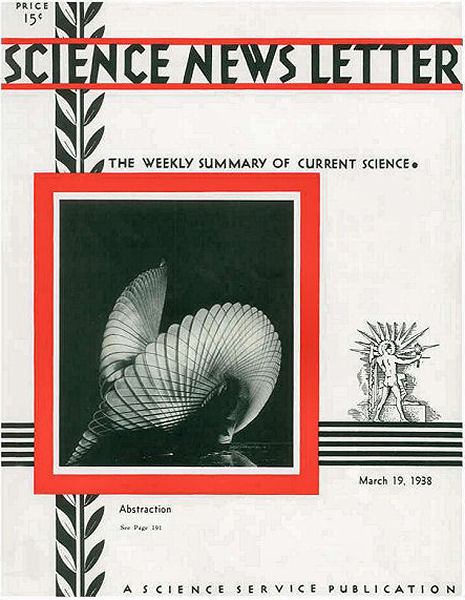 In a novel sort of motion picture, all the “actors” are designs based on the parabola, an important mathematical curve. The photograph shown on the cover of this week’s Science News Letter and all the others that make up the 900 feet of film in “Parabola” are built up from this type of curve.

The parabola is the curve taken by a projectile, by the water of a fountain, or by the cables of a suspension bridge.

Abstract form, it is pointed out by Rutherford Boyd, designer and director of the film, is one of the sources of design and, therefore, of beauty. The designs in the film are synchronized to music.

Looking into the future clear past the giant seaplanes now building and contemplated by the airlines, Igor I. Sikorsky, noted airplane designer, foresees the possibility of building 1,000-ton flying clippers capable of carrying thousands of passengers.

One-hundred-ton seaplanes will be crossing the Atlantic in 20 hours on regularly scheduled lines within the next few years, Mr. Sikorsky, credited with designing the first successful multi-motored aircraft, told an audience attending the fourteenth annual Steinmetz Memorial Lecture, in Schenectady, N.Y.

Planes in the thousand-ton class, although well within the range of engineering possibility, he asserted, may not, however, be the most economical. Sufficient traffic to fill them would be difficult to find. But engineers can build them and may yet do so.

“Limit in the size of aircraft in the future will be dictated not by engineering possibilities, but by economical factors and traffic requirements,” he explained in recalling the erroneous opinion held during the early days of aviation that, with increase in size, airplanes would lose load carrying efficiency and finally would even be unable to fly.

Predicting practical limits to aeronautical operations, he stated that “it is probably that an altitude of 75,000 to 90,000 feet and a speed of from 500 to 600 miles per hour will not be exceeded until a new source of energy giving greater power per unit of weight, combined with a new method of propulsion becomes available.”

Such a new method may well be found, he declared, citing the possibility of developing a method of producing and handling liquid hydrogen for use as a fuel. “Such a development would make possible the circumnavigation of the earth along the Equator in a non-stop flight without refueling.”

A new link between the stars and those smallest atomic particles, the electrons, has been developed mathematically by Prof. Arthur E. Haas of the University of Notre Dame and reported to the scientific world. (Science.)

Thus the stars and electrons are brought into the same physical universe, as it were. The stars are shown to be obeying laws compatible with happenings in the submicroscopic region of the subatomic, where recent progress in physics has suggested the laws might be different than they are in the larger parts of the universe.

From the use of relationships between the radius and age of the universe, the total number of protons and neutrons, Hubble’s constant, Newton’s gravitational constant, the fundamental charge on the electron, the masses of the proton and electron, and the classical radius of the electrons, Prof. Haas found this new relationship and also derived the fact that the mass of the average star is about twice that of the sun. This result agrees with astronomical observations.