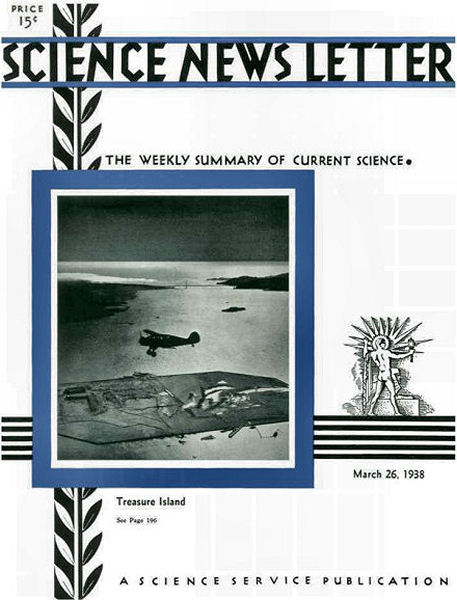 WORLD FAIRS PLANNED TO SHOW THE SCIENCES IN ACTION

Mr. and Mrs. America, 75,000,000 strong, will see the greatest science show on earth next year when the Golden Gate International Exposition in San Francisco and the New York World’s Fair open for business.

Themselves two stunning examples of science in action, the two giant 1939 fairs, far surpassing anything ever done in the United States by way of taking the lid off science, will put on a breathtaking demonstration of what goes on amongst the quiet men who man the laboratories and what they teach for today and promise for tomorrow.

Advance reports, one year before elaborate ceremonies marking opening day, from both coasts promise exhibitions that will take visitors into every corner of the domain of science—from the tiny atom to the giant universe.

Huge industrial exhibits; striking stories of health and the war on disease; a pageant of transportation; laboratories on parade; plants grown without benefit of earth; magic carpets riding over cities of the future; “black light” wizardry painting pictures in the dark—these and many more will dramatize the part of science in today’s and tomorrow’s routine…

Working perhaps for the first time in public gaze, scientists on man-made Treasure Island in San Francisco Bay will present a portrait of life in the future.

Laboratory rats will be fed on synthetic foods and will be shown to be healthier than their normal fellow-rodents. Synthetic foods will be manufactured in small quantities on the spot, while onlookers throng the Exposition laboratories. In the Hall of Science, microbes will be employed to do amazing things. These germs introduced to different media will be made to produce a whole variety of products, such as flavorings, perfumes and medicines. Visitors to the Exposition will also have the opportunity of seeing the much-discussed but little-known hormones and vitamins manufactured.

A complete “chemical” garden growing indoors under ordinary incandescent lighting and without the usual soil promises to be a popular demonstration. Corn, peas, melons, squash, spinach and lettuce are some of the crops which will be grown in the Hall of Science without soil or sunlight.

An up-to-the-minute showing of General Electric’s famous “House of Magic,” in which electricity and electrons are made to perform astonishing feats will be a feature of the Hall of Electricity. “Willie Volcanite,” Westinghouse’s electrical robot who has even been caught smoking, will be put through his paces in this same building. Television demonstrations will be held. Visitors to the Hall will have an opportunity to listen to the footsteps of insects, as a part of a demonstration of the latest in sound amplification equipment.

Soon the compressors at Amarillo will be whirling full speed handling millions of cubic feet of natural gas in order that helium, the sun element, may again hold aloft an airship.

Twenty years ago with great secrecy American engineers and chemists converted helium from a “rare” gas, commanding $2,000 a cubic foot, into a non-flammable competitor to hydrogen as a lifting gas for balloons and airships. When the armistice was signed thousands of cubic feet of helium in cylinders were on a New Orleans wharf ready to be shipped to Germany to do their bit in the fight against the Germans.

Now the Germans of today, the disaster of the hydrogen-filled Hindenburg fresh in their memories, are about to use some 18,000,000 cubic feet of helium for the initial inflation and replenishment during flights that the new Zeppelin LZ-130 will make this summer between Europe and the United States.

America has a monopoly on commercial supplies of helium and Congress after the burning of the Hindenburg enacted a law allowing its sale for restricted commercial, research and medical uses.

The extraction of the 1.8 percent helium in the natural gas from the Cliffside field in the Texas Panhandle is the task of the U.S. Bureau of Mines. Underground in the government-controlled gas field that supplies the Amarillo plant there is an estimated reserve of 1,800,000,000 cubic feet of helium, enough for years to come.

Not content with such a reserve, Uncle Sam has set aside some smaller gas fields in Utah that are much richer in percentage of helium and steps are being taken to purchase helium properties near Dexter, Kan., and Thatcher, Colo.

Sufferers from asthma, and “sand-hogs” and deep sea divers who work under pressure, will benefit from the availability of helium. The gas is used in preventing the “bends” when under-pressure workers are decompressed. And helium is proving useful in treatment of respiratory diseases.

That 800-mile-an-hour insect, the deer botfly, has been completely debunked by science. Twenty-five miles an hour would be more like a reasonable speed for the creature, declares Nobelist Irving Langmuir, associate director of the General Electric research laboratories. (Science, Mar. 11)

Dr. Langmuir went at the problem of the fly’s alleged high velocity—almost twice the speed of the fastest airplane—in a number of ways. Both by theoretical calculations and laboratory experiments he proved that it just can’t happen.

The fly’s speed has been given as 818 miles an hour in widely circulated reports. To do that, Dr. Langmuir calculated, it would have to develop five-tenths of a horsepower—a rather formidable job for an insect. In doing so, it would have to consume about one and one-half times its own weight in food every second it is in flight—and it carries no lunchbox.

But supposing it could develop such power and attain that speed. Against its practically flat head there would develop a pressure of about eight pounds per square inch, probably enough to crush it. If it struck human flesh at the velocity of 818 miles an hour (400 yards per second) it would exert a force of 310 pounds, or about four tons per square inch. That is, it would be a fairly efficient bullet, and would cause a serious wound; nothing of the kind has ever been reported.

In his laboratory experiments, Dr. Langmuir suspended a lump of solder of approximately the dimensions of the fly on a silk thread and swung it at various velocities in a brightly-lighted, white-ceilinged room.

At 13 miles an hour it could be seen only as a blur; at 26 miles it was barely visible; at 43 miles it appeared only as a faint line and its direction could not be told; at 64 miles an hour it became completely invisible. Laboratory light intensity measurements bore out the experimental results: at 64 or more miles an hour an object the size of the deer botfly becomes invisible.