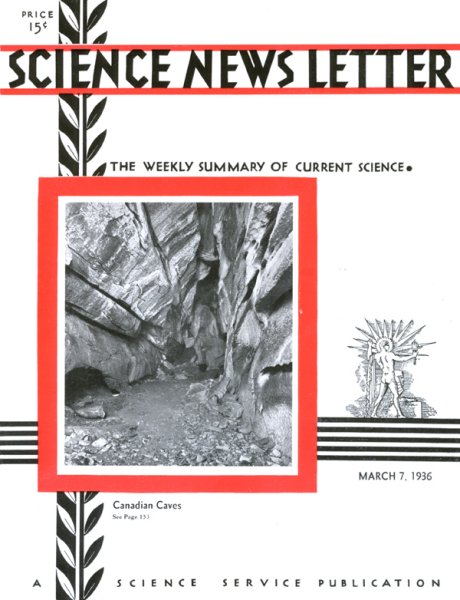 Caves in the limestone strata of the Canadian Rockies just across the boundary from our own Glacier National Park have an architecture all their own, different from the stalactite-pillared development familiar in most limestone caverns. While dripstone is not absent, it is not as abundant as it is elsewhere, and the rugged form of the rock itself is more in evidence, as shown here in the cave popularly known as the Dining Hall. Many geologists believe that earthquakes as well as underground running water had their share in the shaping of these caverns.

Field tests of television will begin in the New York area within 8 weeks, states the annual report to the stockholders of the Radio Corporation of America.

The field test, emphasizes David Sarnoff, president of RCA, does not mean that regular television service is at hand. Transmission from studios atop the Empire State building will be pioneering tests to estimate and define the possibilities of the system under actual working conditions rather than the refined and controlled laboratory conditions of the past.

Problems to be solved during the tests will include determination of how far transmission can be achieved, with what consistency and regularity can pictures by television be transmitted in the present stage of development of the art, and the possibilities of the television camera for indoor and outdoor pick-up.

OLD VIOLIN MAKERS MAY HAVE TESTED BY BRANDING

The secret of how the old master violin makers determined the right kind and graininess of wood to use in their beautifully toned fabrications now is believed found. They may have used a hot branding needle on wood that had been given a slight wax coating.

If the wood was homogeneous, the melting wax formed nearly a circle around the hot needle. If the wood was inhomogeneous and possessed grain, the branding tests showed a long, stretched, narrow ellipse.

Such at least is the simple test discovered by Prof. K. Lark-Horovitz of Purdue University who, for years, has been studying the composition of the wood in old violins by X-rays. From the studies, some of the mystery behind the beautiful tone of an Amati or a Stradivarius violin has been learned.

Prof. Lark-Horovitz has found, for example, that the best instruments have a top of spruce or pine and a back of maple.

The top, X-ray investigations reveal, must possess a distinct fiber structure. The back, of maple, is almost without structure if the instrument is to have a good tone.

What Prof. Lark-Horovitz never could figure out was how the old 16th-century violin makers, 300 years before the discovery of X-rays, were able to tell what the wood structure might be.

The only clue was the markings of branding needles that can be seen on the old masterpieces of the violin-makers’ art.

From this clue Prof. Lark-Horovitz finally found the simple hot branding needle test that, in its way, might tell roughly the same facts in the hands of a master as the more modern X-rays.

“There is nothing known,” explained the Purdue scientist, before the Franklin Institute, Philadelphia, “about the actual use of this method, but it might be an explanation of the many traces produced by branding needles which we see on old instruments.”