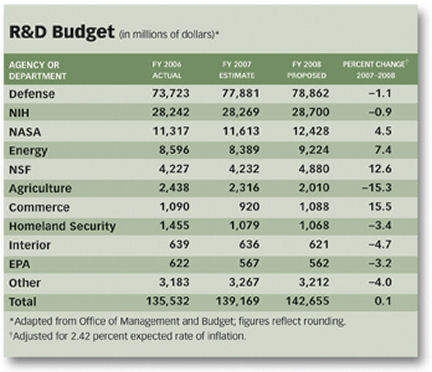 The $2.9 trillion budget devotes nearly $143 billion to research-and-development (R&D) funding. Although this number surpasses FY 2007’s estimated spending by more than $3 billion, the total bump to last year’s estimated R&D budget is only 0.1 percent when adjusted for an expected 2.42 percent rate of inflation.

“It’s an exact replay of last year, and in that way, it’s good,” says Kei Koizumi, director of the R&D Budget and Policy Program at the American Association for the Advancement of Science in Washington, D.C.

In his 2006 State of the Union address, President Bush announced the American Competitiveness Initiative, a program that seeks to bolster basic and applied research in targeted fields, mainly within the physical sciences and engineering. The president’s FY 2008 plan is on track to maintain his promise to double spending over the next decade for three agencies selected as main players in this initiative—the National Science Foundation (NSF), the Department of Energy’s Office of Science, and the Commerce Department’s National Institute of Standards and Technology—by giving the suggested budgets of each of these agencies a significant increase over last year’s proposal.

For example, funding for NSF will rise to $4.9 billion, a 12.6 percent increase over last year’s estimated budget when adjusted for inflation. The foundation plans to allocate $59 million of the new funds to scientific and educational activities associated with the International Polar Year, a program beginning in March that will examine how Earth’s polar regions affect global climate systems. Increased funds will also support an NSF-wide, $52 million investment in developing new tools for analyzing complex physical and biological systems and handling huge quantities of data generated by research, says NSF Director Arden L. Bement Jr.

Another big winner in this year’s budget is the National Oceanic and Atmospheric Administration (NOAA), which is part of the Department of Commerce. Portions of that agency’s $61 million boost will fund research projects that seek to understand the link between ocean currents and abrupt climate change and to improve hurricane-intensity forecasts.

Spending for NASA received a modest 4.5 percent increase. These funds would include $2.2 billion for the new Orion human-spaceflight vehicle and the Aries I rocket that would launch it, beginning in 2014.

This year’s proposed budget brought disappointments to some agencies. For example, the proposed budget provides the Environmental Protection Agency (EPA) with its fourth consecutive year of reductions. EPA’s allotment of $562 million for R&D is down $5 million from the 2007 estimate, a decrease of about 3.2 percent with the expected rate of inflation.

The Department of Agriculture will suffer the most significant reduction of all the science-related government sectors, with a decrease of 15.3 percent for R&D.

“The President once again is using a ‘robbing Peter to pay Paul’ approach,” says Bart Gordon, chairman of the House of Representatives’ Committee on Science and Technology.

However, proposed spending for the Department of Defense and the National Institutes of Health, the two agencies that receive by far the biggest allotments of R&D funding, were almost identical numbers to last year’s.

“The main message is sustain, sustain, sustain,” says NIH Director Elias A. Zerhouni. He notes that with flat budgets for the past several years, the NIH has had to make “tough choices” over where it will direct its funds. This year’s priorities will center on directing grants to promising new scientists, Zerhouni adds, while funds for new buildings and infrastructure will decrease.

Seeing little change from the FY 2007 budget as a whole, most of the offices funded by the President’s R&D budget will probably continue the patterns of spending that they set up last year, notes Koizumi. “It’s another year of the same,” he says.