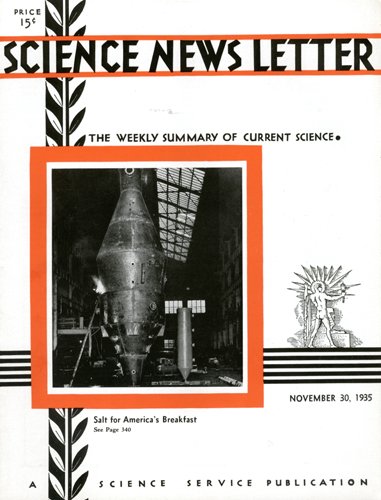 The cover of this week’s Science News Letter shows a new, 25-ton salt evaporator just completed for one of the largest salt manufacturers. Within it a bronze propeller stirs up wet salt and circulates it through more than 800 tubes where the water is distilled off.

The Lincoln Electric Co., which supplied the picture, states that the apparatus is 50 feet high and 12 feet in diameter at its largest point. Arc welding construction was used throughout.

Overweight or obesity is so often associated with “middle-age spread” and “corporation front” that its occurrence in children is apt to be ignored. It is so easy to say, “Oh, my people are all fat like that,” and to attribute to the ductless glands the blame for such overweight.

Just as often the family eating habits are at fault. That such is the case is well shown by a report of Drs. Hannah Mulier and Helen Topper of the Pediatric Service of Mt. Sinai Hospital, N.Y., who gave “slimming” treatment to 25 overweight boys and girls not only without harm but with marked improvement in general health as well as in weight.

To do this required careful adaptation of the diet to fill the needs of the child. Not only must the diet furnish enough energy for the internal needs of the body organs and glands, but also for growth and for the child’s activities. It must also be low enough to force the body to consume some of its own excess fat.

These doctors therefore gave relatively large amounts of protein foods, such as meat, eggs, and cheese, to ensure continued normal growth; with but small amounts of sugars and starches, and larger amounts than customary of the bulky foods, such as vegetables and fruits.

ROTORS WHIRLING AT 16,000 MILES AN HOUR FOR ATOM STUDY

The cream separator, which takes cream out of milk by high-speed whirling, has a smaller but vastly faster scientific counterpart in a 16,000-mile-an-hour centrifuge at the University of Virginia. This device, which develops a centrifugal force equivalent to 7 million times gravity, is to be used in an effort to separate chemical isotopes, which are different-weight atoms of the same chemical elements.

Dr. Beams’ rotor device can spin in a vacuum and attain velocities as high as 21,000 revolutions a second, or a rim speed of over 16,000 miles an hour. At these speeds, the centrifugal forces produced are in excess of 7 million times the force of gravity.