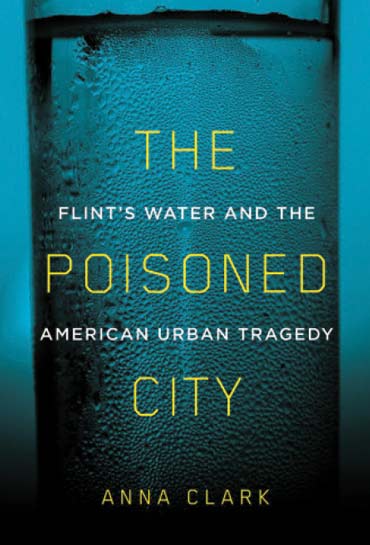 America is built on lead. Networks of aging pipes made from the bluish-gray metal bring water into millions of U.S. homes. But when lead, a poison to the nervous system, gets into drinking water — as happened in Flint, Mich. — the heavy metal can cause irreparable harm (SN: 3/19/16, p. 8). In The Poisoned City, journalist Anna Clark provides a thorough, nuanced account of the public health disaster in Flint — one that, she argues, was magnified by government malfeasance and decades of systemic racism.

Trouble first began in April 2014. To save the cash-strapped city some money, Flint’s emergency manager switched the city’s source of water from Detroit’s water system, which drew from Lake Huron, to one that tapped the Flint River. But the city’s water treatment program didn’t include corrosion control, which the Michigan Department of Environmental Quality said wasn’t necessary — a violation of federal law. The result: Corroded pipes leached lead into drinking water.

Residents, forced to use the brown, smelly tap water, developed rashes and lost clumps of hair. Twelve people died from Legionella bacteria, which the corrosive water dislodged from pipes, and dozens more were sickened. Despite residents’ complaints, as well as an independent analysis that found higher-than-allowable lead levels, state officials insisted that the water was safe, even when their own internal records showed it was not. “Anyone who is concerned about lead in the drinking water in Flint can relax,” said one spokesperson for the Michigan Department of Environmental Quality.

That’s when one of the book’s heroes, pediatrician Mona Hanna-Attisha, enters Clark’s story. About 18 months after Flint switched to its new water source, the percentage of children under age 5 with high blood-lead levels nearly doubled from 2.1 to 4 percent, Hanna-Attisha discovered after taking a close look at Flint kids’ medical records. (Hanna-Attisha’s own account of her experiences, What the Eyes Don’t See, was published in June.)

Faced with mounting evidence that became hard to ignore, Gov. Rick Snyder negotiated a switch back to Detroit’s water system in October 2015, declaring a state of emergency a few months later. Meanwhile, taps in Flint were retrofitted with filters as the long, slow process of replacing pipes began. The Michigan National Guard trucked in bottled water.

Readers who followed this crisis as it unfolded will still learn plenty in The Poisoned City. Clark goes into exquisite detail explaining not only what happened, but also why it happened. A history of racist housing, education and hiring practices precipitated the city’s “debt, dysfunctional urban policy, disappearing investment, disintegrating infrastructure, and a compromised democratic process,” she writes. The evidence linking these factors to the water crisis is compelling. Anyone wanting to dig deeper can refer to the book’s exhaustive bibliography.

Overall, Clark does a masterful job weaving together history, science and rigorous reporting to tell Flint’s story, which served as a “wake-up call” for cities around the country. A 2016 investigation by the Natural Resources Defense Council found that more than 5,300 water systems across the United States were in violation of federal lead rules. And it’s not just cities that are affected, Clark notes. Rural America is vulnerable, too. But replacing America’s lead pipes is an expensive proposition. By some estimates, removing lead service lines alone would cost somewhere between $30 billion and $1 trillion.

Four years after Flint’s water crisis began, residents are still grappling with lingering effects: potentially lifelong health problems, ruined pipes that will take years to fix and zero trust in government. In April, Michigan declared Flint’s water safe. But people who live in the city are not convinced. And Hanna-Attisha has urged the state to continue Flint’s bottled water program until all of the lead service lines are replaced.

Buy The Poisoned City from Amazon.com. Science News is a participant in the Amazon Services LLC Associates Program. Please see our FAQ for more details.