Cold mud from the seafloor has revealed signs of a new group of microbes that could be the nearest living relatives yet found to the domain of life that includes people and other creatures with fancy cell structures.

That mud carries DNA of a previously unknown and unusual phylum of one-celled microbes, researchers report online May 6 in Nature.

The microbes in this newly named Lokiarchaeota phylum carry the basic DNA of one-celled life called archaea, sisters to the domain of bacteria. Yet they possess roughly 100 genes that resemble those in eukaryotes, organisms with intricate structures in their cells.

“What was very surprising was the type of function of these genes,” says paper coauthor Thijs Ettema of Uppsala University in Sweden. What the genes do in Lokiarchaeota is still a matter of hypothesis. But in eukaryotes, many of these genes help with tasks not observed in archaea, such as changing cell shape and controlling internal compartments called vesicles. 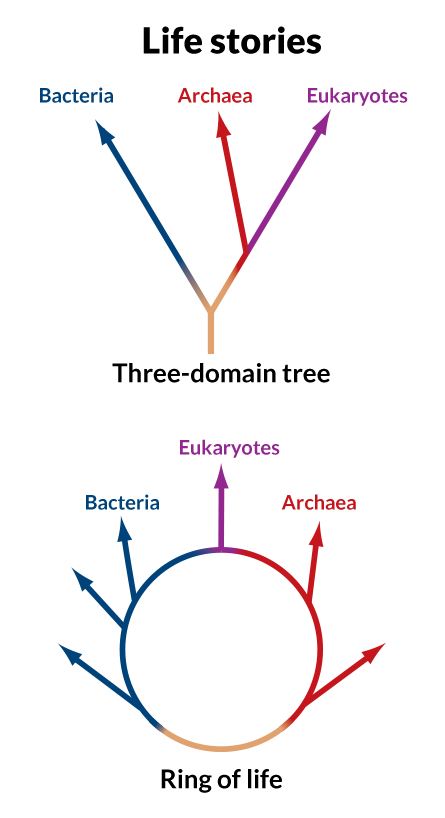 For decades, variations of a three-domain hypothesis (one variation shown, top) dominated thinking about how major groups of life split apart. An alternative, a ring diagram, shifts the emphasis away from whose ancestors diverged when. Instead, the ring emphasizes that ancient archaea and bacteria, single-celled groups with little internal cell structure, could have merged genes and given rise to complex, structure-rich cells of eukaryotes.

The discovery of Lokiarchaeota could intensify debates about how living cells got complex. In recent decades, biologists largely embraced a broad view that divided living organisms into three vast domains: Two — archaea and bacteria — have single cells with no nuclei holding DNA or little structures tucked into membranes.

The third domain — eukaryotes — packages DNA inside cell nuclei and furnishes cells with internal nuggets such as mitochondria that specialize in handling energy. How such elaborate cells arose has puzzled biologists since they have not found clear-cut intermediate forms that suggest the evolutionary steps.

The new find has “genes that might provide a very good starting point to becoming eukaryote,” says James McInerney of the National University of Ireland Maynooth. It strengthens a hypothesis, called the ring of life, that eukaryotes arose not from a single ancient lineage but rather by mingling genes from two kinds of less-structured cells.

This hypothesis is especially promising in light of the discovery of Lokiarchaeota genes that might allow these organisms’ cell membranes to engulf other cells, says evolutionary biologist Mary O’Connell of Dublin City University. One objection to the ring-of-life idea has been the need to explain how genetic merging took place when neither archaea nor bacteria appear able to swallow other organisms. The new phylum, however, might have managed.

It took extreme feats of computing to discover the new genetic mix, Ettema says. Researchers extracted DNA from promising bits of mud in a sediment core coaxed from the ocean floor more than two kilometers deep along the Arctic Mid-Ocean Ridge. The researchers censused the DNA fragments with a computer program that sorted bits into separate kinds of life.

The Lokiarchaeota showed up as a blend of genes, some distinctive to archaea and others resembling those from eukaryotes. The more eukaryote-like genes aren’t likely to be genetic material snitched from full-fledged eukaryotes, Ettema says. Microbes do snitch, but these genes were scattered among bona fide archaea DNA instead of appearing in chunks, as stolen goods do. And though similar, they were not entirely like eukaryote genes.

Since these conclusions are based on computer analysis of DNA, “we have huge gaps in our knowledge of what these beasts actually are,” McInerney says. “There is a lot of work to do to try to really understand if their relatives 2 billion years ago were important for formation of the eukaryotic cell.”