Graduate student Craig Ulrich carried out his first published research project not in a university lab, but as a prison inmate.

In 2004 Ulrich accidentally shot and killed a college classmate. Convicted of first-degree manslaughter (which in Washington state means a death caused through recklessness), he ended up at the Cedar Creek Corrections Center in Littlerock, Wash. His college background in biology made him a perfect candidate to work in the facility’s composting program, set up by Evergreen State College in nearby Olympia. Data he collected appeared in a 2009 research paper showing that composting programs can help prisons cut landfill-bound waste in half and improve wastewater quality. Today Ulrich (left) is pursuing a Ph.D. in biochemistry at the University of Nevada School of Medicine in Reno.

“I went into prison and came out a scientist,” says Ulrich, one of many Washington prisoners connected to science and nature by collaborative projects between Evergreen and the Washington State Department of Corrections.

About an hour’s drive from Ulrich’s former cell, a women’s prison works with the Oregon Zoo in Portland on a project raising and releasing endangered Taylor’s checkerspot butterflies. Inmate Carolina Landa had no experience in science, but she helped develop a technique for grinding up plantain leaves that helped the butterflies digest them.

“We call it ‘plantain pesto,’ ” says Evergreen graduate student Dennis Aubrey, who worked with Landa. “It really worked. Insects that ate the pesto went through their first three molts almost twice as fast.” Inmates at three prisons grow indigenous plants that provide the butterflies and other insects with food and places to lay eggs outside the prison fences. To date, almost a million golden paintbrush and other prairie plants have been raised at the facilities, and many have been transplanted into the wild.

The programs have another side effect, says Charlie Washburn, correctional program manager at Cedar Creek. One inmate working in the plant program “was always uptight, always angry and always mad,” he remembers. “That anger went away out there in the greenhouse,” Washburn says. “I got a call after he got out of prison. He said, ‘I’m looking for a job in a nursery, and I need a reference.’ ” 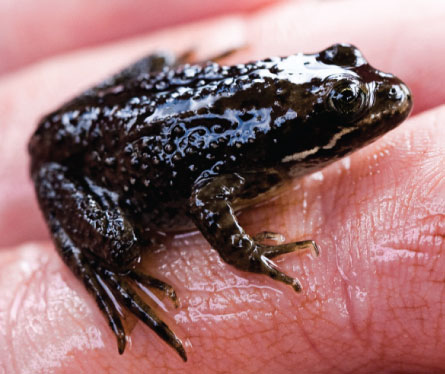 One program at Cedar Creek Corrections Center has prisoners raising endangered Oregon spotted frogs. The prisoners collect data on water quality, frog growth and mortality while rearing the animals. Last fall, a crop of 246 frogs was released into the wild at Joint Base Lewis-McChord near Tacoma, a safe haven for the species.