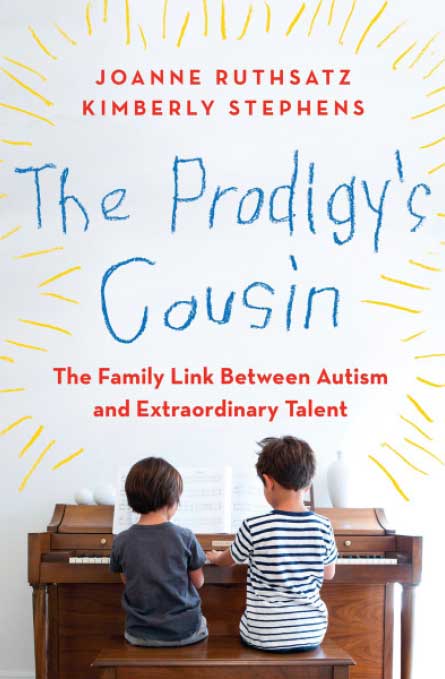 In 1998, Joanne Ruthsatz traveled to Louisiana to meet a 6-year-old musical genius. Ruthsatz, a graduate student at the time, hoped to evaluate the boy as part of her work “unearthing the inner workings of the prodigy mind.” While taking a break from testing her subject, Ruthsatz met the boy’s cousin — a nonverbal teenager with autism. She suddenly wondered: Could there be a link between one boy’s talent and his relative’s autism?

In The Prodigy’s Cousin, Ruthsatz and her daughter, journalist and sociologist Kimberly Stephens, explore the scientific and anecdotal evidence that may help answer this question. The book centers on the stories of young savants that Ruthsatz, now a psychologist at Ohio State University, has encountered in her own work. The authors draw on the children’s stories to explore the idea that certain similarities — for example, extraordinary memory and atypical empathy — link prodigy and autism.

Ruthsatz and Stephens survey the history of autism and prodigy, occasionally mulling over the notes of geneticists, neuroscientists and autism researchers such as Hans Asperger. However provocative, the data linking the two conditions are sparse, muddled or baffling. For instance, preliminary data suggesting a genetic link between prodigy and autism need to be replicated, the authors say. However, if these tantalizing hints hold up, they argue, studies of child prodigies could help shed light on autism and provide a potential Rosetta stone for a baffling, diverse disorder that is difficult to define and treat.

Yet more than diagnoses or data, The Prodigy’s Cousin is about people. There’s Jourdan, who displayed perfect pitch before his second birthday and interned at Cold Spring Harbor Laboratory by age 9. Another prodigy, Autumn, taught herself to paint before first grade and gave her first solo art exhibition at 10. And Jacob participated in an astronomy lecture at age 3 — the same year he was diagnosed with autism — and enrolled as an official college student at 11.

Whether or not their lives inform new clinical understandings, the stories of these extraordinary young achievers, growing up with unique gifts and challenges, deliver a fascinating look at the humanity behind the world of brilliant, unusual minds.

Buy The Prodigy’s Cousin from Amazon.com. Reviews on the Science News website include Amazon.com links that generate funds for Society for Science & the Public programs.