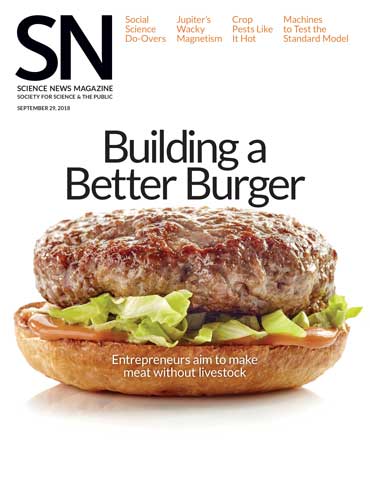 “What happens when the object (such as an airplane wing) to which the material has been applied is subjected to the sun on a hot summer day?” asked online reader Nell Kroeger. “Could the object dangerously overheat?”

The material can heat up to tens of degrees Celsius above the ambient temperature, says Susmita Dash, an engineer at the Indian Institute of Science in Bangalore. A coated airplane wing on a hot summer day will heat up, she says, but “I don’t think it will reach a dangerously high temperature.”

Breaking dry spaghetti noodles without shattering them is almost impossible. But using a custom device, researchers found that twisting and bending a noodle will create a clean break, Maria Temming reported in “Here’s how to bend spaghetti to your will” (SN: 9/29/18, p. 5).

Twitter user Charles Tam poked pun at the work: “Why would anyone pastably consider this sort of research? It’s bound to land in hot water … it’s a noodle scratcher. #dadjokes.”

Dash suggests one way to avoid potential overheating: use the material only during the cold season. “In the case of rooftops … I think it can be used as a laminate during winters and can be easily removed and stored during the summers,” she says.

Scientists around the United States are developing programs that can predict in advance toxic red tides, like one that’s ravaging Florida’s coast, as well as other harmful algal blooms, Leah Rosenbaum reported in “As algae blooms increase, scientists seek better ways to predict these toxic tides” (SN: 9/29/18, p. 14).

“Coastal states plagued with blooms … seem to be spiraling toward disaster from global warming and runoff from agriculture,” reader Enrique Petrovich wrote. “Would agricultural chemical runoff cause these toxic algal blooms if the farms were converted to organic?” he asked.

Excess nutrients — such as nitrate and phosphate — whether organic, inorganic or synthetic are all usable by algae and can lead to rapid growth, says oceanographer Clarissa Anderson of the Scripps Institution of Oceanography in La Jolla, Calif.

Unless organic farms are better at controlling runoff, Rosenbaum adds, they can still contribute to blooms.