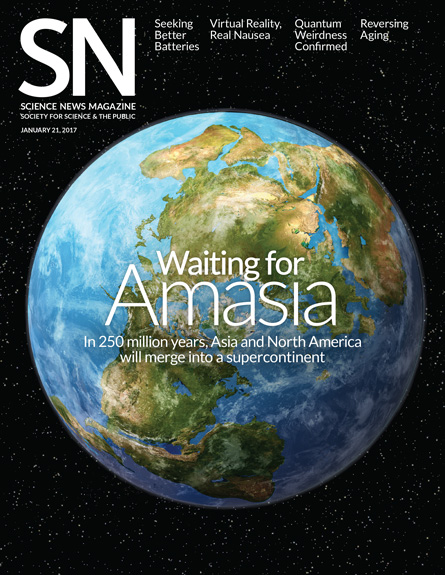 Saved by the Bell

Reader George Mitchell took issue with Conover’s description of entangled photons before they are measured as having multiple polarizations at once. “We don’t know the direction of their polarization,” Mitchell wrote. “It is undefined.”

“Multiple polarizations” in this context is meant to indicate that there are multiple possible outcomes of a polarization measurement; the particle does not have a definite polarization that is simply unknown. “Bell tests like the one in the a­rticle confirm this interpretation,” Conover says (SN Online: 1/27/16).

It’s similar to how Schrödinger’s cat can be in a “superposition” of both alive and dead at the same time (SN: 11/20/10, p. 15). “It’s not that we don’t know whether the cat is alive or dead; it’s both,” she says. “This is hard to wrap one’s head around.” In any case, it is effectively impossible to put a real cat in a superposition, because it is too large to display the strange properties of quantum mechanics. “But for particles,” she says, “this is acceptable behavior.”

Reader Pierre Grillet wondered how subduction — the process by which a tectonic plate is pushed beneath another tectonic plate — could pull continents apart. “I would suggest that a different mechanism is also at work here. Rising material must balance crust material being subducted into the mantle,” he wrote. “It would make sense that this rise should occur in the center of the plate, where the mantle is hotter. Rising material would then spread sideways, pushing the sides of the plate over the oceanic crust and pulling the plate apart.”

The process Grillet describes is a theory proposed by some researchers. Other researchers have doubts (SN: 4/4/15, p. 13). “Plumes of hot material rising from the mantle could rip continents apart, but the plumes would have to rise up at weak points along continental boundaries, which seems unlikely,” says Thomas Sumner, Science News’ earth sciences writer. A competing theory covered in the story suggests that subduction tears continental plates apart by pulling at their edges.

Reader Tom Wicker was disappointed that the beginning of the story equated power and energy. “Everybody wants more power from their batteries,” Gaidos wrote, citing smartphone, laptop and electric-car batteries as examples.

“Laptop batteries can supply more than enough power. You need to charge them frequently because of the limited amount of energy they store,” Wicker wrote. “It is of course correct that drawing more power, more energy per unit time, from a battery will drain it faster. But that is true even though the battery may have no problem supplying the required amount of power. It just can’t do that for as long as required due to insufficient energy storage.”

Wicker’s distinction between energy and power is correct, Gaidos says. “When talking about batteries, the term ‘portable power’ is frequently used, when what is really meant is portable energy. The research under way, as described in the story, aims to create batteries with high power that can maintain that power through a large number of recharge cycles,” she says.