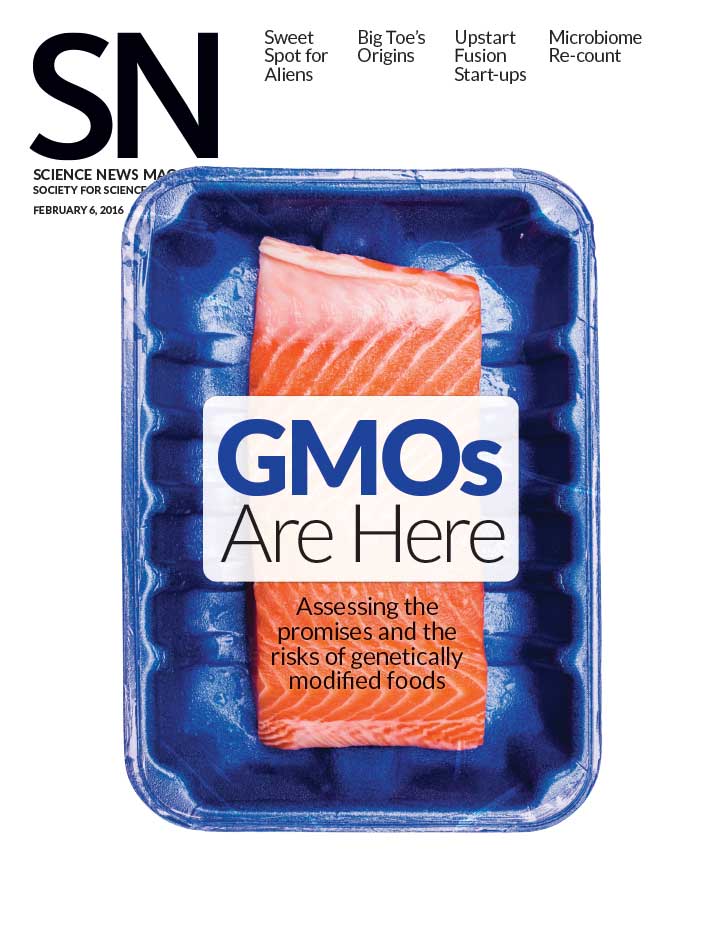 Foods containing genetically modified organisms have been on grocery store shelves for decades, with plenty of evidence that eating them is no more dangerous to health than eating conventional foods, Rachel Ehrenberg concluded in “GMOs under scrutiny” (SN: 2/6/16, p. 22).

Reader response to the article was overwhelming, with many thanking Ehrenberg for her well-balanced approach and other readers still not convinced of the story’s conclusions. Again and again, readers expressed worries over potential health risks associated with the commonly used herbicide glyphosate. Ehrenberg, who discussed some of these concerns in a recent news story (SN: 3/19/16, p. 7), notes that glyphosate is not a GMO and so its health effects were outside the scope of her original article. “The overuse of herbicides and pesticides is not unique to GM crops,” she adds. “It also happens with conventional crops.”

Other readers had more specific questions. Linda Mix was surprised to learn that GM wheat is not currently on the market and wanted to know why not. “That knowledge is certainly not out in the public arena,” she wrote.

Janetium after Charles Janet, who proposed a radically new representation of the periodic system….

“Ah” … The element of surprise!

Though Monsanto developed a genetically modified wheat that tolerates glyphosate several years ago, Ehrenberg says, the company halted efforts to bring it to market, calling it “less attractive relative to Monsanto’s other commercial priorities.” In 2013 and 2014, strains of this “Roundup Ready” wheat were found growing in an unplanted field in Oregon and at an agricultural research center in Montana, where Monsanto GM wheat had been grown previously in field trials.

The U.S. Department of Agriculture launched an investigation and concluded that the Oregon plants were an isolated incident; the agency is still investigating the GM wheat in Montana. But no GM wheat varieties are for sale or in commercial production in the United States, and the USDA investigation found that no GM wheat had made it into commercial circulation.

Some readers wondered how Gilliland arrived at these numbers. “While ‘hundreds of millions of years’ sounds good,” wrote Steve Goldhaber, “is it realistic?”

The figure often quoted for the deuterium-deuterium fusion energy content of the world’s oceans is roughly 1031 joules, Boyle responds. The International Energy Agency estimates that annual world energy consumption for 2012 and 2013 was roughly 6 x 1020 joules. That would suggest, theoretically, a more than 10-billion-year supply. It is difficult to know how much energy consumption will increase in the future, Boyle says, but Gilliland’s assumption appears to be based on current levels, give or take an order of magnitude. For more detail, Boyle recommends two books: A Piece of the Sun by Daniel Clery (SN: 7/27/13, p. 30) and Sun in a Bottle by Charles Seife (SN: 10/24/08, p. 38).

“Supermassive black hole is extreme recycler” (SN: 2/6/16, p. 9) described a cosmic jet shooting gas 30,000 light-years away. “Most of the ejected gas falls back down onto the central region of the galaxy,” Christopher Crockett wrote.

Michael Dovichi asked, “Is there really an up and down in space?”

Up and down are human constructs, but they can be useful as relative terms in space, Crockett says. “It’s not uncommon to think of up and down in space the same way we do on Earth — as movement against or along with a gravitational field.” Astronomers also sometimes refer to locations above and below a galaxy, where “above” is in the northern hemisphere and “below” in the southern. Here, the terms are based on the system’s direction of rotation.