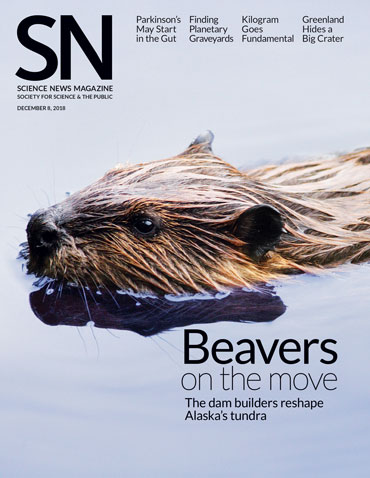 Abnormal proteins tied to Parkinson’s disease may form in the gut before traveling through the body’s nervous system to the brain, Laura Beil reported in “A gut-brain link for Parkinson’s gets a closer look” (SN: 12/8/18, p. 22).

The vagus nerve offers a connection between nerves in the gut and those in the brain. Beil reported on one study that showed that people who had their vagus nerve cut above the stomach had a lower Parkinson’s incidence starting five years postsurgery than people who did not have the surgery. Reader Terrence Kerwin wondered why there was a delay between the surgery, known as a vagotomy, and the drop in Parkinson’s disease risk.

“It’s possible that by the time of the vagotomy, abnormal proteins may have already reached the peripheral nervous system,” Beil says. From there, the proteins can continue to the brain. So rates might not diverge immediately.

Reader Alecia Flores wanted to know more about fecal transplants as a potential treatment for Parkinson’s.

While growing evidence suggests a gut connection to the disease, the role of the microbiome remains unclear. At this point, fecal transplants are used only for treating infections caused by antibiotic resistant Clostridium difficile bacteria. But researchers hope that the transplants or some other gut intervention could someday be a viable treatment option for Parkinson’s, Beil says.

Reader Gypsy Troy thought the finding might be useful for developing antitracking technology for military jets.

Jets and other aircraft are detected using radar, which relies on radio waves. The moths, on the other hand, evade sonar, says bioacoustician Marc Holderied of the University of Bristol in England.

But his group’s moth research might someday be useful for submarines. “Marine antisonar stealth coating is a very well-established field,” he says. “Whether and how our discovery could inspire the experts in this field remains to be seen. We would be really pleased if our discovery of how moths do this could help make future stealth coatings thinner or lighter.”

Scientists will soon rely on a fundamental constant of nature, Planck’s constant, to define the mass of a kilogram, Emily Conover reported in “It’s official: We’re redefining the kilogram” (SN: 12/8/18, p. 7).

Reddit user zalurker wondered if the new definition of a kilogram’s mass would resolve confusion about the units of weight on other planets.

In short, no, Conover says. Weight is a force, not a mass. A person’s weight depends on gravity and so will be different on different planets. “But for masses, the new definition will make it easy to compare with anyone anywhere in the universe,” she says.

If we were to ever communicate with aliens, they would probably use different units of mass. Because Planck’s constant is the same everywhere in the universe, “aliens also have access to it, so they could use it to convert their units of mass into kilograms,” Conover says.

Saturn’s icy moon Dione has long, thin, bright lines near its equator that run surprisingly parallel to each other for tens to hundreds of kilometers, Lisa Grossman reported in “Saturn’s moon Dione has stripes like no others in the solar system” (SN: 12/8/18, p. 32).

Scientists don’t know what made the stripes, which don’t track with Dione’s topography. Reader Tom Ostwald suggested that the stripes might not be on the moon at all. “Could they be evidence that Dione has rings?” he asked.

Grossman doubts that the lines could be rings, or shadows of rings. “The images were taken from many different angles over the course of the Cassini mission, so any 3-D qualities of the lines should have shown up,” she says.