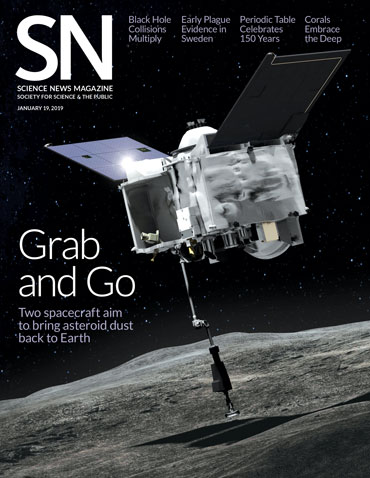 Scientists have long thought that children inherit mitochondria — tiny energy factories found in cells — from only their mothers. But data from three unrelated families suggest that in rare cases children can also inherit mitochondria from their fathers, Tina Hesman Saey reported in “Dads, not just moms, can pass along mitochondrial DNA” (SN: 1/19/19, p. 8).

Online reader John Turner had a lot of questions about dad-derived mitochondria.

In most cases, paternal mitochondria enter the egg at conception but are usually tagged for destruction and removed, Saey says. “As to how many paternal mitochondria escape that death sentence, there’s really no way to know without thoroughly examining a large number of people’s DNA with a technique called deep sequencing,” she says. “The first person discovered to have paternal mitochondria carried them only in his muscle cells. Detecting dad’s mitochondria in other tissues may require more than a blood or spit test.” The researchers think this phenomenon is probably rare. Mothers are still the parents who pass along the majority of mitochondria.

Online reader stargene wondered what implications the finding might have for the human molecular clock, which traces human evolution via changes in mitochondrial DNA.

“This shouldn’t radically affect a human’s mitochondrial clock,” Saey says. The clock “is based on rates of mutations in mitochondria rather than on which parent passes along the organelles,” she says.

On Twitter, @msssmhr shared a tidbit about the noble gases neon, krypton, argon and xenon. “They bear curious Greek names … which mean ‘the new,’ ‘the hidden,’ ‘the inactive’ and ‘the alien.’ They are so satisfied with their condition that they do not interfere in any chemical reaction.”

Reader Steve Trudell objected to the article’s description of what happens to different forms of nitrogen, called isotopes. In the story, Hamers explains that concentrations of nitrogen-15 and nitrogen-14 in meat differ because nitrogen-15 is harder to break down than nitrogen-14.

Hamers acknowledges that the wording is confusing. “Trudell is correct that these nitrogen isotopes don’t decay like radioactive isotopes do,” she says. It’s the compounds that contain isotopes that break down. In decaying meat, bacteria break down molecules rich in nitrogen-14 easier than those rich in nitrogen-15. Microbes take up the lighter nitrogen-14 more readily because it requires less energy to use, says paleobiologist Kimberly Foecke. As a result, nitrogen-15 is left behind.

Ocean plastic pollution is a scourge on shallow and deepwater habitats around the world (SN: 2/20/16, p. 20). “Scientists are just beginning to understand what tiny plastic debris do to deep ocean corals,” Martin says. For example, laboratory experiments on one deep ocean coral species suggest that microplastics inhibit coral growth, researchers reported in 2018 in Scientific Reports.

The story “Five explosive things the 2018 eruption taught us about Kilauea” (SN: 2/2/19, p. 22) reported that by the time the months-long eruption of Kilauea ended in August, nearly 300 hectares of seafloor had been added to Hawaii’s southeast coast. This is incorrect. The volcanic eruption added almost 300 hectares of land.