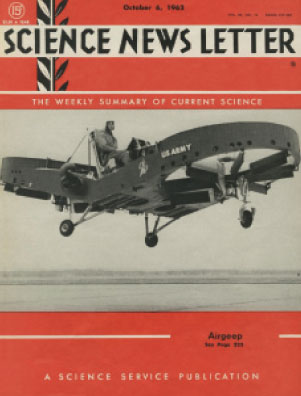 SOLID-STATE GYROSCOPE “DOES THE TWIST” — The “Twist” has reached outer space. A new solid-state gyroscope which “does the twist” has been developed by Westinghouse research scientists, the company announced. The vibragyro — as the dancing cylinder is called — develops a lengthwise twist for the same physical reason that body twist develops in a “twister” doing the popular dance. This is the first successful solid-state gyro and is particularly suited for use in space capsules and satellites, the scientists claim. The new gyro looks nothing like the conventional wheel-spinning gyroscope…. Like a rotating-wheel gyro, however, it has the same ability to act as a reference in space, detecting any motion that tries to swing it out of position…. With no rotating parts, this vibragyro is especially suitable for applications in weightless, ultra-high-vacuum conditions in outer space.