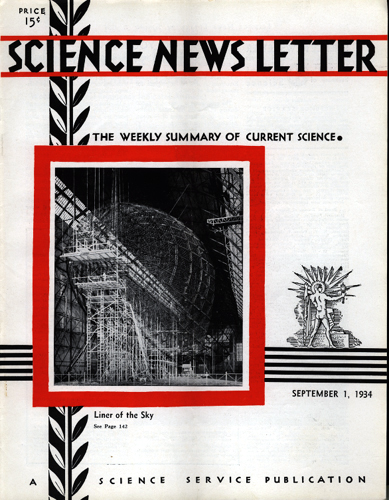 The new German zeppelin LZ-129, now under construction at Friedrichshafen, Germany, will shortly go into operation on the South Atlantic “run” from Europe to South America.

Only slightly longer than the U.S. Navy airship Macon, the LZ-129 will, however, be the world’s largest airship, for it will be buoyed up by over 7 million cubic feet of hydrogen gas. This exceeds the volume of the Macon by some half-million cubic feet.

The LZ-129 will supplement the veteran Graf Zeppelin on the trans-Atlantic route across Spain, the South Atlantic, and Brazil.

In its internal appointments the LZ-129 will be as luxurious as a crack ocean liner. There will be two promenade decks, large staterooms for passengers, baths with running water, and most unique of all, a special fireproof smoking room. In addition, there will be quarters for a crew of 35 and storage space for freight amounting to 10 tons.

Giant pigs of rhinoceros size roamed the plains of North America about 37 million years ago. But horses then were only about the size of deer, and camels, which also lived in North America, were much smaller than those of today.

This somewhat fantastic picture of the distant past is painted by R.A. Stirton, curator of the museum of paleontology at the University of California, who returned recently from South Dakota, where he and his assistants made extensive fossil excavations. These were carried on at Big Spring Canyon and along the Little White River, near Flint Hill, on the Pine Ridge Indian Reservation. Seventeen skulls of primitive animals were found, as well as various miscellaneous animal remains.

Dogs learn the meaning of certain words very well and are not fooled by similarly sounding words. Nor are they fooled by certain other circumstances purposely introduced to confuse them. These facts were brought out by extensive experiments made by Dr. Emanuel Sarris at the Institute for Environmental Research, at Hamburg, Germany.

Several dogs were used. They were given such names as Paris, Haris, Aris, Argos, Niki, etc., some of which have very similar sounds, others very different. The dogs learned to respond to their respective names perfectly. They were then taught a few simple words and phrases of importance in the dog world, such as meat, stick, basket, on the chair, under the table, etc. Once having learned these words and phrases, they recognized them under a variety of confusing circumstances by their sound alone, independent of tone of voice or emphasis, and without the help of signs or gestures. They recognized them when mixed with other words, when the speaker and object were out of sight, and whether the voice was male.