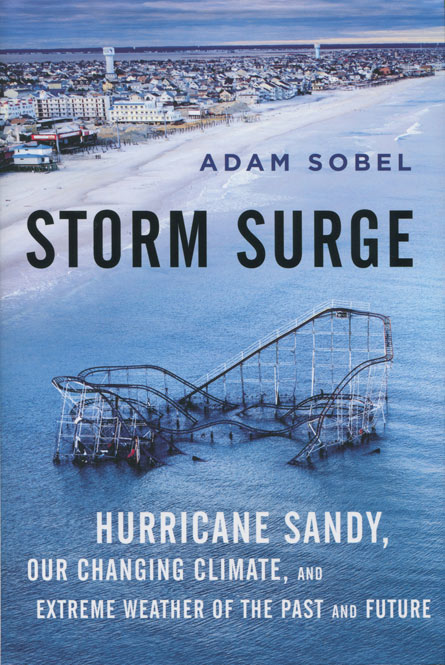 Storm Surge: Hurricane Sandy, Our Changing Climate, and Extreme Weather of the Past and FutureAdam SobelHarperCollins, $27.99
On October 28, 2012, Superstorm Sandy did something no Atlantic hurricane on record had ever done: The huge storm hooked sharply westward just before it slammed into the Eastern Seaboard. The storm — which technically lost hurricane status when it left the tropics but packed hurricane-force winds when it made landfall — killed 117 in the United States and caused up to $65 billion in damage. Arriving at high tide, Sandy flooded parts of New York City’s subway system.

Storm Surge is a powerful account of Sandy’s growth, evolution and aftermath, told by an atmospheric scientist who lives in New York City and experienced the storm firsthand. Artfully woven into Sobel’s tale is a chronicle of the painstaking development of the computer simulations used to predict today’s weather.

Without such models, meteorologists would have never prophesied Superstorm Sandy’s unprecedented leftward jink, but simulations using atmospheric physics identified that possibility more than a week before the storm made its fateful swerve.

More than a tale of scientific success in storm path prognostication, Storm Surge potently illustrates the problems that will probably plague coastal regions worldwide in the future. Although scientists still disagree on whether climate change will increase the number or strength of hurricanes and their cyclonic kin in decades to come, there’s no doubt that rising sea levels, brought about by water’s expansion as it warms, will exacerbate coastal flooding. Indeed, in the not-so-distant future, higher sea levels will make it easier for strong storms, even those with onshore winds of less than hurricane strength, to inundate coasts as readily as Sandy did.

Storm Surge issues a clarion call to address our planet’s inexorably rising tides. The question that remains is whether governments will rise to the occasion before the next disaster strikes.

Buy Storm Surge from Amazon.com. Sales generated through the links to Amazon.com contribute to Society for Science & the Public’s programs.