You’re confined to a single lane as you drive along a narrow, winding road. The car in front of you suddenly slows, then just as inexplicably accelerates a short time later, only to slow again. As you keep adjusting to the leading car’s erratic speed changes, you sometimes find a clump of vehicles closely tailing you and, at other times, only a few vehicles in sight. 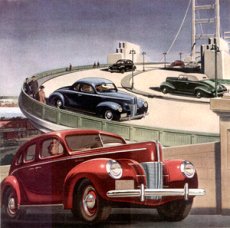 From a physicist’s point of view, traffic flow can be regarded as a “many-body system of strongly interacting bodies.” Various studies have revealed that such systems can show wavelike behavior and abrupt transitions from one state to another. The shift from freely moving to jammed traffic, for example, corresponds to a phase transition from gas to liquid.

Using such models, researchers have identified various factors that induce traffic jams. These factors generally correspond to everyday situations: mistimed traffic signals, a blocked lane, the narrowing of a freeway to fewer lanes, a busy exit or entry ramp, a truck slowly grinding its way up a hill.

Computer simulations also suggest that at moderate traffic volumes when vehicle flow should be relatively stable, a single car moving at randomly fluctuating speeds within a steady stream of traffic along a single lane can by itself create waves of congestion that propagate down the road behind it. Cars far from the offending vehicle can find themselves unexpectedly caught up in localized traffic jams that have no apparent cause.

Suppose, for instance, that one vehicle unexpectedly slows down, then speeds up. The cause could be a parent distracted by a vociferous child or an aging car struggling up a steep slope. Cars behind that vehicle slow down in response, and traffic begins to bunch up until the lead vehicle’s speed increases again. This transitory bunching can develop into a persistent cluster of dense traffic that moves backward relative to the car with the fluctuating speed.

The amount and type of congestion induced by an erratic driver depend on how much the leading car’s velocity fluctuates, even when the average speed matches that of the rest of the traffic. For moderate fluctuations, for instance, an erratically driven car can trigger a train of density waves, which move upstream like shock waves. The situation worsens when the average traffic speed is slower. Isolated, moving clusters quickly grow into a nearly continuous jam of congested traffic as the average speed decreases.

The simulations clearly suggest that, under the right circumstances, an individual driving erratically enough can readily cause the sorts of traffic jams normally associated with much heavier traffic.