Microbes discovered in Arctic mud could be the closest relatives yet found to the single-celled ancestor that swallowed a bacterium and made life so complicated. Biologists have proposed that this swallowing event, perhaps 1.8 billion years ago, led to complex cells with membrane-wrapped organelles, the hallmark of all eukaryotes from amoebas to zebras.

Researchers discovered the new phylum of microbes, dubbed Lokiarchaeota, by screening DNA from sediment (SN: 5/30/15, p. 6). Though no one has identified an actual cell yet, the new phylum appears to mingle genes similar to those in modern eukaryotes and genes from archaea, the sister group to bacteria. Analyses suggest the cells have dynamic structures that could have engulfed bacteria long ago. (Biologists have proposed representing that merger as a ring of life, rather than a tree.) What happened next in the tale is clearer but still a puzzle.

Unlike the three-domain tree, the ring conveys that bacteria and archaea merged to give rise to eukaryotes. 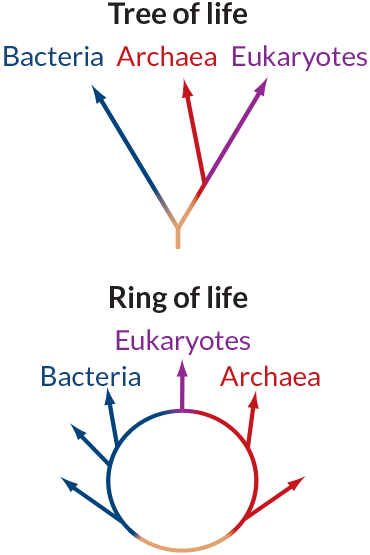 “We don’t have all the existing pieces right now because a lot of the diversity of microbial eukaryotes remains unexplored,” says Patrick Keeling of the University of British Columbia in Vancouver, who studies early eukaryote history. But what scientists have found has radically reshaped the old multicellular-biased tree of life learned by generations of schoolchildren.

This year marked the 10th anniversary of a paper, in the Journal of Eukaryotic Microbiology, that served as an obituary for that tree (SN: 8/8/15, p. 22). Old textbooks had drawn a eukaryote treetop that branched into three kingdoms of mostly multicellular organisms (plants, animals and fungi) and one hodgepodge kingdom of single-celled beasts called Protista. Beginning in the late 1980s, though, new genetic studies relegated the multicelled kingdoms to mere side branches on five to seven much bigger branches of mostly single-celled protists.

This new scheme has held up “pretty well,” says Sina Adl of the University of Saskatchewan in Saskatoon, a coauthor on the 2005 paper. In the May 22 Science, for example, the Tara Oceans consortium, which surveyed plankton worldwide, classified diversity using the new divisions: SAR, Amoebozoa, Archaeplastida, Excavata and Opisthokonta (to which humans belong). These aren’t exactly house-hold names, though — at least not yet.