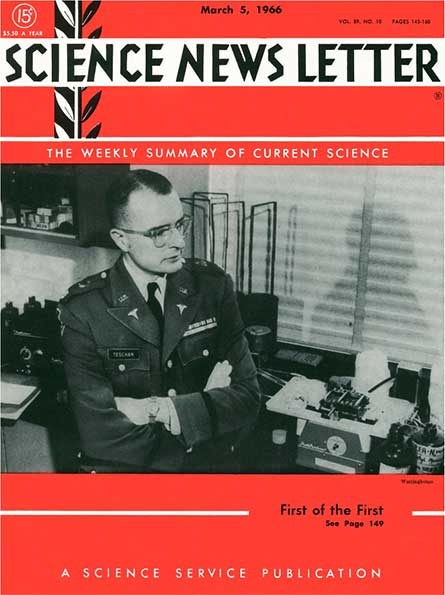 Plutonium’s 25th year — The 25th anniversary of the discovery of plutonium was celebrated in February…. Plutonium, a highly radioactive metallic element, is made by bombarding uranium with neutrons…. The nuclear energy released by the fissioning of one pound of plutonium is equal to the explosive effect of 20 million pounds of TNT.… Plutonium is now emerging as the nuclear energy source of the future. It was the first and is still the only radioisotope producing power in space and is in use now on four satellites. — Science News Letter, March 5, 1966

Unlike Europe, the United States has been slow to use plutonium as a power source on the ground. But the element still drives NASA’s long-distance missions, recently fueling the New Horizons probe on its trip to Pluto (the element’s namesake). U.S. nuclear reactors could begin using plutonium to generate electricity if construction is completed on a South Carolina facility. The site will make nuclear fuel with small amounts of plutonium extracted from retired Cold War–era weapons.