Some people age faster than others, a long-term study of New Zealanders reveals. But there’s good news for the rapid agers: Studies in mice indicate there may be ways to slow the aging rate.

Like a class reunion photo, a physiological snapshot of 954 people born in Dunedin, New Zealand, in 1972 and 1973 shows that time has been kinder to some people. The calendar indicated all those people were 38 years old, but their biological ages ranged from 28 to 61, researchers report July 6 in the Proceedings of the National Academy of Sciences.

Biological age is based on how healthy a person is compared with the average health of a large number of people of various ages. Biologically older participants were weaker, less coordinated, had lower IQs and felt and looked older than their biologically younger counterparts.

The researchers tracked 18 different health measures over time. Those biomarkers included blood sugar and cholesterol levels, lung function, blood pressure, dental health, body mass index, waist circumference and the length of protective caps called telomeres at the ends of chromosomes. Shorter telomeres have been associated with aging (SN: 12/15/12, p. 13). People with the oldest biological ages had been aging more rapidly at least since they were 26 years old, the researchers discovered.

Some researchers think the problems may have started even earlier, in early childhood. Children who are malnourished, neglected, abused, poverty-stricken, exposed to chemicals such as lead, or who live around violence may suffer from poor health (a measure of aging) as adults. 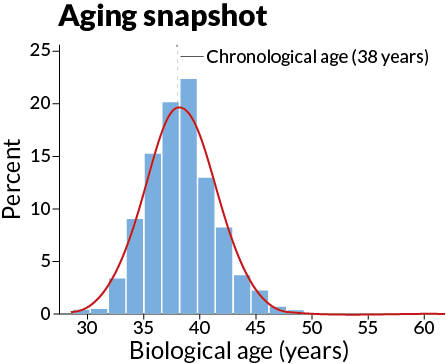 A group of 954 New Zealanders had a wide variety of biological ages even though they were all chronologically 38 years old. The finding is evidence that people age at different rates.

No single factor appeared responsible for rapid aging, the researchers found. There probably isn’t just one, says lead author Daniel Belsky, an epidemiologist at Duke University School of Medicine. He and colleagues found that aging affected all organs and body systems at once.

“We see people on the street and we know they age at different rates,” says Bruce McEwen, a neuroscientist at Rockefeller University in New York City. But scientists haven’t had the data to back up that common wisdom. No one knew for sure that rapid aging started so early in life, either, McEwen says. Now biomarkers from the new study may enable doctors and researchers to determine how fast people are aging and whether drugs or lifestyle changes can slow the pace.

Most antiaging therapies have been aimed at people already past retirement age. Belsky thinks such treatments should start much earlier to prevent diseases associated with aging, such as heart problems and Alzheimer’s. “Antiaging interventions are going to have a heavier lift if they are only applied to people in their 60s, 70s and 80s,” he says.

One problem is that no effective antiaging therapies have been found yet. But work with mice suggests elixirs of youth may be in the blood. Scientists have previously discovered that sewing together the circulatory systems of an old and a young mouse rejuvenates the old mouse, but makes the young mouse age more quickly (SN: 5/31/14, p. 8). Some potential rejuvenation factors in blood have already been identified.

Mice loaded up with the protein had trouble remembering where to find a submerged platform in a water maze. The mice also had difficulty associating a foot shock with being in a particular cage. Fewer new brain cells than usual grew in the hippocampus, an important learning and memory center, when young mice were injected with B2M. The birth of new cells in that part of the brain may be important for forming memories (SN Online: 5/2/14).

Young mice could recover from being injected with the protein, indicating that its effects may be reversible. Villeda’s team also found that mice genetically engineered to lack the B2M protein continued to have sharp minds as they aged. In comparison, the memories of normal mice got worse. That finding indicates that getting rid of excess B2M in people’s blood may improve memory and slow brain aging, Villeda says.

Researchers used to think that cells just wore out with age, but experiments such as Villeda’s indicate that factors in the blood may influence how fast someone ages, says Benjamin Alman, an orthopedic surgeon and developmental biologist at Duke University who was not involved in either study.

“The potential exists that if you identify the right factor or group of factors, you can reverse the effects of aging,” Alman says.

There may be no single drug that can combat aging in adults, researchers say. Far better than fighting aging is preventing it, and for that you have to start very young, says Linda Fried, an epidemiologist and gerontologist at the Columbia University Mailman School of Public Health.

“It’s sexy to go after antiaging medicine,” Fried says, but improving the social, economic and environmental factors that cause childhood hardship and health damage may be just as important. “How we set our young people up now will influence their life course.”