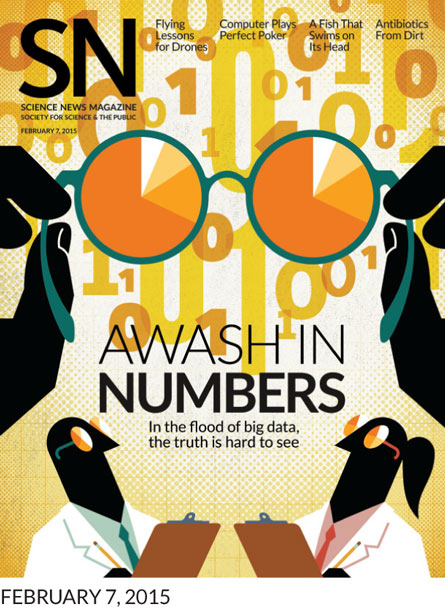 Send in the drones

Readers were wowed by the technical prowess expected in the next generation of drones. “Fascinating,” commented Jim LeSire. “I didn’t think they’d have the computer processing capability for doing this so soon. The mechanical aspects, yes, but not the ‘brains.’ Very impressive.” On Twitter, Will Spears summed up the feelings of many readers: “The future looks exciting.”

Others, though, expressed concerns about flooding the skies with human-made fliers. “Something I’ve not heard mentioned once is the potential ecological impact once drones begin to share many properties with wildlife, including size, shape and population density,” wrote commenter bruzote. “Will falcons injure themselves on bird-sized drones? Also, how will a flock of birds behave when encountering a flock of drones?” After reading Eva Emerson’s Editor’s Note about the feature (SN: 2/7/15, p. 2), Mayra Bloom agreed that a more measured approach to describing the implications of new scientific endeavors such as drones was needed. “I encourage SN’s superb editors to report not only the promise, but also the dangers, side effects and possible misuses of the science they represent and champion so ably.”

On the Science Visualized map (SN: 2/7/15, p. 32), the 120-year temperature rankings of Delaware, Florida and Rhode Island were correct, but the states should have been colored yellow, as below. 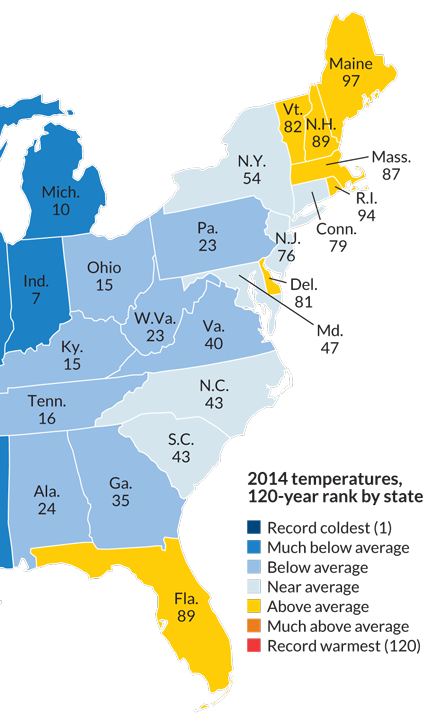 Kepler’s planet count continues to climb. An analysis of data from the space telescope adds new worlds to the catalog of suspected exoplanets, including a few that might host liquid water on their surfaces, as Christopher Crockett reported in “Kepler finds 554 potential planets” (SN: 2/7/15, p. 9).

“I’ve read many articles that discuss how space researchers can detect planets revolving around their suns by seeing minute drops in the starlight as the planet or planets cross in front of their sun as seen from our telescopes,” wrote Steve Ostrom. “Knowing that all planetary systems are not so perfectly aligned to our unique viewing angle, what would be the approximate percent of these star systems that give us such a great view of planet transits?”

Getting a good view depends on the size of the star and the length of the planet’s orbit, Crockett says. Large stars provide a bigger target, and planets that huddle close to their stars can be seen from a wider variety of angles. The probability of seeing an Earthlike planet transit a sun-sized star, for example, is only about 0.5 percent. But that number jumps to nearly 10 percent when the planet’s distance from its sun-sized star is one-tenth of Earth’s distance from the sun. The reason Kepler has found so many planets — more than 1,000 confirmed and nearly 3,200 candidates — is that the telescope searched more than 150,000 stars.

In “Computer algorithm masters poker” (SN: 2/7/15, p. 14), Andrew Grant introduced Cepheus, a program that’s proved to be unbeatable at heads-up limit Texas Hold’em despite knowing nothing about its opponent’s hand.

“I just finished reading Brian Christian’s The Most Human Human, and was therefore very interested in Grant’s article,” wrote Dennis Kell. “One difference between poker and games like checkers and chess is the ability to ‘read’ other players. The most successful poker players do not bluff or call bets randomly. They read other players’ actions. It would seem to be a great advantage to a computer that its human opponent cannot read its eyes or actions. No need for sunglasses.”

In “High fliers” (SN: 2/7/15, p. 18), the credit for the photo of a hawk moth hovering in front of LED lights was omitted on Page 20. Jonathan P. Dyhr should receive credit for the image.