In May, researchers began reporting that the massive jets of crude emanating from BP’s damaged Deepwater Horizon well were creating deep, diffuse plumes of oil in the Gulf of Mexico. Since then, chemical oceanographers have been probing the plumes for indirect clues about how quickly native bacteria might be gobbling up the oil.

He’s part of a broad team of scientists from two Department of Energy national labs and two universities that has been collecting plume samples continually for months. In a paper posted online August 24 in Science, the team reports data from late May to early June showing that those deep-sea plumes enticed a hitherto unknown cold-water–adapted bacterium to rapidly chow down on the oil.

Indeed, Hazen says, those bugs have been so voracious that for one plume of oil his team had been following, “within the last three weeks we no longer detect a deep plume. At all.” It went away approximately two weeks after the well was capped on July 15, he observes. Its oil “is completely undetectable.”

Also, the unusual population of oil-digesting bacteria that had inhabited that plume — and that would ordinarily be expected to stay with it as it moved — remained behind in a vestigial microbial cloud. “Doesn’t that suggest biodegradation?” he asks.

Speaking of deep-sea plumes, “I’ve heard rumors they might have gone missing,” notes David Valentine, a microbial geochemist at the University of California, Santa Barbara — but currents might simply have moved them into hiding. It would be nice to think the oil has been removed, he says. “But if it sounds too good to be true,” he cautions, “it probably is.” And yes, “This sounds too good to be true.”

Only a week earlier, scientists from the Woods Hole Oceanographic Institution in Massachusetts reported evidence in Science that native microbes were feasting, albeit slowly, on a plume the researchers were mapping. Their measurements, made in the month before the BP well was capped, did not include any microbe counts or species identifications, Hazen says — both of which his team included.

“I was amazed,” Hazen says, “at how similar [the Wood Hole data] were to ours in terms of the definition of the plume” — its estimated flow rate, size, path and very low oil concentrations. Where the data diverge is over the oil’s estimated degradation rates.

In the field and in lab tanks where plume microbes were housed with crude oil, petroleum appears to have a half-life of just 1.2 to 6.1 days, the latest study finds. In essence, Hazen explains, every two to six days the volume of the surviving oil fell by half. The bacteria responsible mostly belonged to a newly identified species that may have constituted 90 percent of bacteria in the plume, versus only some 5 percent of those outside it.

The microbes didn’t deplete the water’s oxygen stores quickly, as might have been expected. Evidence of their prodigious activity was measured in a depression of nitrates in the water, Hazen says, and a continuous loss of straight-chain oil hydrocarbons known as alkanes — first the shorter ones and then the longer hydrocarbons. Also among the bugs was a floc of wastes from the petroleum dining.

Hazen’s interpretation has its skeptics. “Most of the science associated with this spill has been oversimplified,” says John Kessler, a chemical oceanographer at Texas A&M University in College Station. In a good-faith effort to make sense of what’s going on, many researchers look to offer interpretations based on too few data, he charges.

For instance, he says, “what Hazen was measuring was a component of the entire hydrocarbon matrix,” which is a complex mix of literally thousands of different molecules. Although the few molecules described in the new paper in Science may well have degraded within weeks, Kessler says, “there are others that have much longer half-lives — on the order of years, sometimes even decades.”

Moreover, he points out, many of the tools traditionally used to gauge biodegradation don’t work well in the field. A few teams have lately begun transitioning to use of more sensitive probes, he says.

And data from those more sensitive tools are fueling his skepticism of Hazen’s report that microbes have been erasing deep-sea plumes. As recently as August 22, Kessler says, “I spoke to some of those researchers out there [in the Gulf], and they told me they were still seeing plumes.”

Back Story: Eyes in the Sky

Before submersible vehicles could measure the extent of the Deepwater Horizon plume beneath the Gulf of Mexico, NASA’s Terra and Aqua satellites started tracking the growth and movement of oil slicks on the water surface.

April 21: No oil is visible in this image taken the day after the explosion, but a plume of smoke can be seen spreading southeast from the floating Deepwater Horizon rig (orange dot). 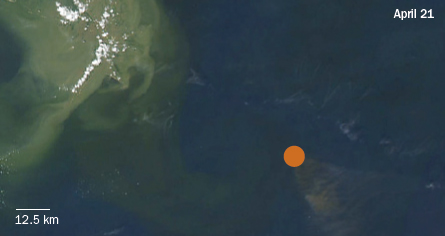 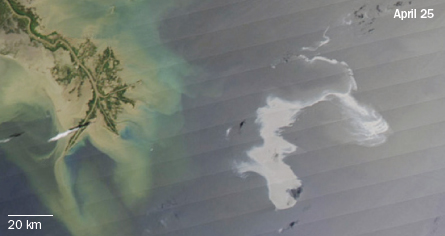 May 24: The oil has spread to the outer reaches of the Mississippi Delta, with tendrils swirling north and east from the main slick. Another slick tails off to the southeast. Because of the way the sun glints off the sea’s surface, the slick appears white in some locations and dark in others. 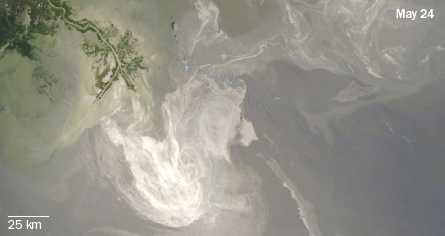 June 25: Oil has reached the offshore islands of Alabama and Mississippi, and swirls will eventually be seen throughout the Mississippi Delta region.