On November 15, Scott Gottlieb, commissioner of the U.S. Food and Drug Administration, announced new sales restrictions on certain e-cigarette flavors preferred by teens. The move was a response to a worrying rise in vaping among adolescents in the last year. “E-cigs have become an almost ubiquitous and dangerous trend among teens,” he warned, calling it an “epidemic” in a September speech.

His claim is no exaggeration. In 2018, 20.8 percent of high schoolers surveyed said they had used e-cigarettes at least once in the last 30 days, up from 11.7 percent in 2017. That is a 78 percent jump in e-cig use, based on data from the National Youth Tobacco Survey (SN Online: 11/16/18). On December 17, the 2018 Monitoring the Future survey, a national substance use questionnaire of 8th, 10th and 12th graders, reported similar increases in the New England Journal of Medicine.

That spike may be due to use of the top-selling e-cigarette brand, Juul. One of a new class of e-cigarettes called pod-mods, a Juul vaporizes a prefilled pod of flavored liquid that contains a higher concentration of nicotine than other e-cigs. The palm-sized device resembles a USB flash drive and can be used discreetly, as it doesn’t produce much vapor. A survey of 437 California high school students found that teens are more likely to become regular users of Juuls than of other e-cigs (SN Online: 10/23/18). Teens already have their own term for vaping: juuling.

After declining a few years ago, teen vaping shot up again last year, likely due to the popularity of the latest generation of e-cigarette devices, such as Juul.

Percentage of students who use e-cigarettes and tobacco products, 2011–2018 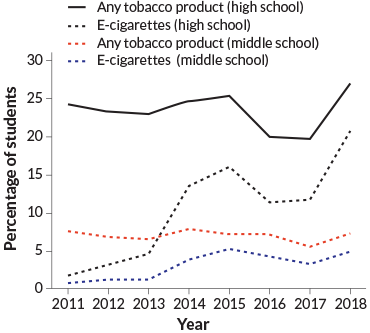 A person who inhales all of the nicotine in a 5 percent nicotine Juul pod (a 3 percent version is also available) takes in about the same amount as a smoker would get from 26 to 40 cigarettes, says toxicologist Gideon St. Helen of the University of California, San Francisco. A pod may last about a day for a heavy user, he says.

Juul’s high dose of nicotine alarms public health officials. But use of any e-cigarette or vaping product containing the addictive chemical puts youth at risk. Adolescents and young adults are more likely to become addicted than older adults. Nicotine also harms brain development — ongoing until around age 25 — affecting mood and impulse control. Other health concerns, which apply regardless of age, include toxic vapors and lung problems (SN: 7/11/15, p. 18).

The idea that e-cigarettes are a lesser evil than traditional cigarettes because they don’t release cancer-causing tar is irrelevant when it comes to teens, researchers say. “The majority of young people who are using vapes never wanted to use cigarettes to begin with,” says Bonnie Halpern-Felsher, a developmental psychologist at Stanford University School of Medicine. The correct comparison, she says, is “vapes vs. nothing.”

The medical community is playing catch-up on vaping, says Anne Thorndike, an internist at Massachusetts General Hospital in Boston. But the message for teens who vape is clear, she says. “If you continue using, you will become dependent on nicotine.”