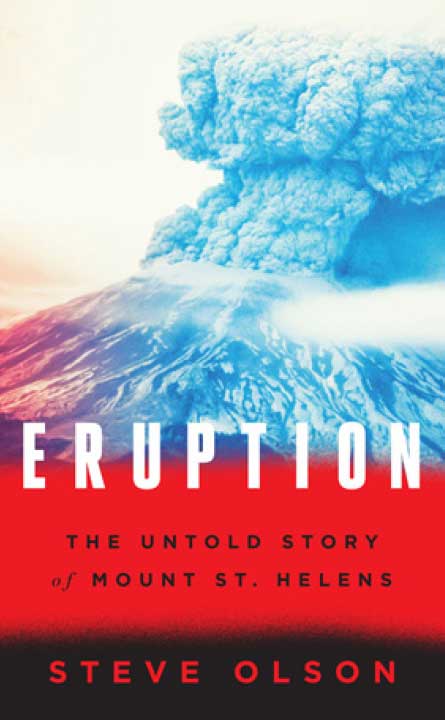 Early in the spring of 1980, immense and inexorable forces were roiling the Pacific Northwest. Oh, and one of the region’s most active volcanoes was getting ready to blow its top.

In Eruption, science writer Steve Olson goes well beyond recounting Mount St. Helens’ geologic awakening, deadly explosion and aftermath. This fascinating book also chronicles the economic and cultural tensions gripping this part of the nation in the run-up to the May 18, 1980, catastrophe.

The eruption itself — which was more powerful than the 1906 San Francisco earthquake or even a small atomic bomb — removed about 400 meters of formerly tranquil mountaintop.

Earthquakes that rocked the peak in the weeks before the eruption exacerbated long-simmering tensions between environmentalists and the logging companies that wanted to extract as much timber as possible before the wood was lost to an eruption. The tremors also created short-term friction between the scientists and authorities who sought to protect the public from an impending, though fundamentally unpredictable, disaster and the locals and tourists who wanted to get to their homes and prime fishing spots near the volcano. Proposals to expand the restricted zones around Mount St. Helens were sitting on the governor’s desk awaiting signature when the peak finally blew.

But the book’s most gripping parts are the accounts of those who survived the eruption and the stories of those who were smothered by ash, crushed by falling trees or swept away by one of the largest landslides humans have ever seen. Fifty-seven people died during the eruption, a toll that would have been much higher had the blast not occurred on a Sunday, when logging crews had the day off.

In retrospect, Olson contends, it is clear that people had been allowed to get too close to a dangerous volcano. Scientists had been concerned about the kilometer-wide bulge that had grown on the north slopes of Mount St. Helens in the weeks before it erupted. Geologists had previously theorized — but had never before seen — a lateral blast of the scope seen when the peak blew out ash from its side. The oddly hummocky terrain left in the eruption’s wake (SN: 4/24/10, p. 18) enabled scientists to recognize that similar eruptions have happened at other peaks worldwide — just one of the scientific legacies of Mount St. Helens.

Buy Eruption from Amazon.com. Reviews on the Science News website include Amazon.com links that generate funds for Society for Science & the Public programs.