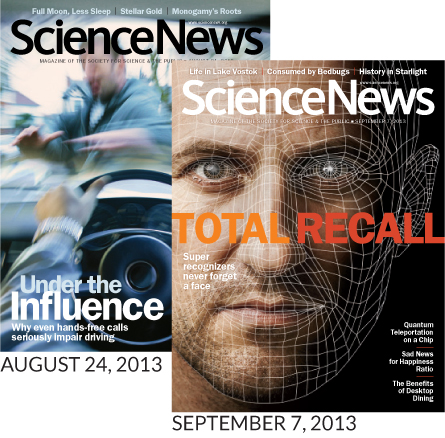 The story generated a virtual pile-up of reader comments by e-mail, on our website and on social media.George Cowan comments online that the article “should be required reading in every drivers’ ed course.” But a number of readers seemed to have missed one of Seppa’s key points: Research shows that talking on a cell phone even hands-free with a driver’s eyes on the road, takes a mental toll. Bob Davis e-mails, “Do we make it illegal for the driver to talk to the passengers? Should the pilot of an airplane be forbidden to talk to air traffic control or even the copilot?” Seppa replies,“Passenger conversations present a mixed bag. Researchers say that a trivial chat with an adult passenger who is watching the road might not hurt overall performance. But talking to kids in the backseat can pull a driver’s eyes off the road, and an in-depth conversation with an adult who is oblivious to traffic gobbles up a driver’s cognitive resources, a net loss for driving. Teen drivers are six times more likely to brake hard or swerve when there is a loud conversation in the car and are more likely to crash when carrying teen passengers.” Reader Larry Eaton says by e-mail, “It seems to me that there are an infinite number of things people do that cause distracted driving. Why attempt to outlaw just a few? It sends the message that the others are acceptable.”Seppa notes, though, that not all distractions are equal: “Listening to the radio degrades driving skills less than conversation does, researcher David Strayer and his team found recently. Listening to books on tape falls somewhere in between.” On Facebook, @Dio Windmills Alexandersums up feedback from another faction of readers: “Who does such foolishness? Being distracted while operating a lethal weapon? That’s nuts.”

Correction: Several readers pointed out that a map of cell phone driving restrictions reversed the names of Connecticut and Massachusetts. We apologize for the error.

In “Ratio of a good life exposed as ‘nonsense’ ” (SN: 9/7/13, p. 5),Bruce Bower reported on a recent critique of the math in a 2005 paper that claimed to have calculated a particular ratio, about 2.9, of positive to negative emotions that “enables life success.”

Reaction was divided on the story and on the math controversy that sparked the debate. Bower’s story was “more critical than anything I have ever seen in a Science News article,”Janice Gendreau e-mailed. “After all, I have read in this very publication that 80 percent of scientific research cannot be duplicated, and much of it has statistical errors. But wait, why was this ‘good life’ research so widely embraced? It validates what many of us experience daily; negative forces have a greater impact than positive ones. [Nicholas Brown and Alan Sokal, coauthors of the critique,] may be crowing now, but I predict they will have to eat crow in the long term.” Science News tweeted the story with the question “Do you think a scholarly paper should be retracted where a coauthor admits the paper has ‘questionable mathematics’?” Some replies pointed out that science is a process of trial and, notably, error. “Didn’t Einstein say discovery doesn’t happen without mistakes?” tweeted Anna Rosswoods(@ARosswoods).Chelsea Du Fresne (@snarkipodicus) replied, “Science needs mistakes, but publishing those mistakes as truth undermines science.”

Update: A correction ran online September 16 in American Psychologist, the journal where the original positivity ratio paper was published. “The modeling element of this article is formally withdrawn as invalid and, along with it, the model-based predictions about the particular positivity ratios,” the notice stated. The paper has not been retracted, however, and the debate continues, with further response planned, Sokal told the blog Retraction Watch.